A Doll's House and Other Plays (Penguin Classics) : With Pillars of the Community, Ghosts and an Enemy of the People[Paperback] 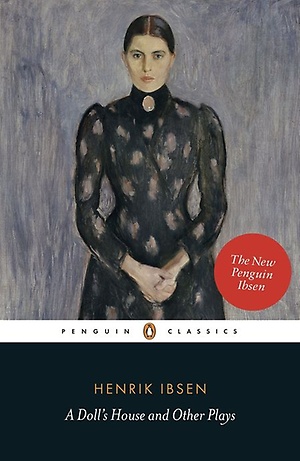 With her assertion that she is “first and foremost a human being,” rather than a wife, mother or fragile doll, Nora Helmer sent shockwaves throughout Europe when she appeared in Henrik Ibsen’s greatest and most famous play, A Doll’s House. Ibsen’s follow-up, Ghosts, was no less radical, with its unrelenting investigation into religious hypocrisy, family secrets, and sexual double-dealing. These two masterpieces are accompanied here by The Pillars of Society and An Enemy of the People, both exploring the tensions and dark compromises at the heart of society.

'Our home has never been anything other than a play-house. I've been your doll-wife here, just as at home I was Daddy's doll-child'

These four plays established Ibsen as the leading figure in the theatre of his day, sending shockwaves throughout Europe and beyond. A Doll's House scandalized audiences with its free-thinking heroine Nora. Ibsen's even more radical follow-up, Ghosts, exposes family secrets and sexual double-dealing, while Pillars of the Community and An Enemy of the People both explore the hypocrisy and the dark tensions at the heart of society. This new translation, the first to be based on the latest critical edition of Ibsen's works, offers the best version available in English.

[A Doll's House and Other Plays (Penguin Classics)]의 데이터 요약정보