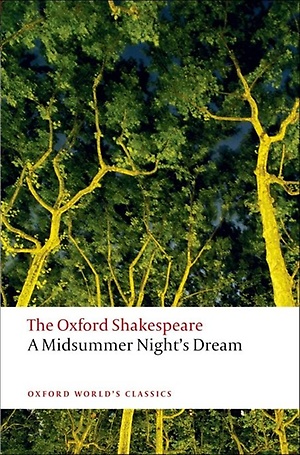 Enter Theseus, Hippolyta, with others [Philostrate and attendants]

THESEUS Now, fair Hippolyta, our nuptial hour Draws on apace. Four happy days bring in Another moon: but O, methinks, how slow This old moon wanes; she lingers my desires,
Like to a stepdame or a dowager Long withering out a young man's revenue.

HIPPOLYTA Four days will quickly steep themselves in nights,
Four nights will quickly dream away the time.
And then the moon, like to a silver bow New-bent in heaven, shall behold the night Of our solemnities.

THESEUS Go,Philostrate,
Stir up the Athenian youth to merriments,
Awake the pert and nimble spirit of mirth,
Turn melancholy forth to funerals:
The pale companion is not for our pomp.

Hippolyta, I wooed thee with my sword,
And won thy love doing thee injuries.
But I will wed thee in another key,
With pomp, with triumph and with revelling.

Enter Egeus and his daughter Hermia, Lysander and Demetrius

THESEUS Thanks, good Egeus: what's the news with thee?

EGEUS Full of vexation come I, with complaint Against my child, my daughter Hermia.

A Midsummer Night's Dream is perhaps Shakespeare's most popular play, particularly as a first introduction to Shakespeare for children--filled as it is with a marvelous mixture of aristocrats, workers, and fairies. For this edition, Peter Holland's introduction looks at dreams and dreamers, tracing the materials out of which Shakespeare constructs his world of night and shadows.