Reading Sherlock without a Dictionary. 9 : The Casebook of Sherlock Holmes 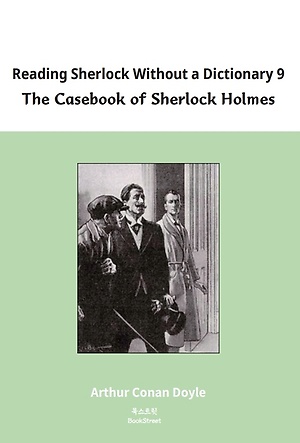 The Casebook of Sherlock Holmes

“In five minutes I shall return for your final answer. You quite grasp the alternative, do you not? Shall we take you, or shall we have the stone?” P. 98

but none the less it was certainly at the window that Holmes was fixing his concentrated attention. P. 152

The Illustrious Client
Sir James Damery calls upon Holmes and Watson. He says that he came as an agent of a client who could not reveal his identity. He tells them his request.
A villain named Baron Adelbert Gruner was the one who started the problem in the first place. Gruner has an outstanding appearance and an attractive charm. Violet de Merville, a daughter of General de Merville, met Gruner on a Mediterranean yachting voyage. She fell in love with him, and it was no use trying to dissuade her from meeting him. He told his ugly past to her in a tricky way and pretended to be an innocent martyr. She believed in his words and they planned to get married next month. The Baron has expensive tastes, and he is well versed in Chinese pottery.
Holmes decides to investigate the case and mentions Shinwell Johnson. He was a criminal in the past and is now an agent of Holmes.
Holmes goes to Vernon Lodge near Kingston to see Gruner.
Gruner is an excellent antagonist and a real aristocrat of crime. Gruner already knows that Holmes is trying to interfere with his marriage to Miss de Merville. Holmes tries to persuade Gruner to back away from Miss de Merville, but Gruner rejects Holmes’s request.
When Holmes takes his leave, Gruner talks about Le Brun, a French agent, who was beaten by ruffians. Gruner threatens Holmes that he would get into trouble if he keeps inquiring about his affairs.
Johnson brings Miss Kitty Winter to their place. She had been mistreated by Gruner in the past and has a grudge against him. According to Winter, Gruner has a book that includes all the records of women he was involved with.
Holmes arranges a meeting between Miss Winter and Miss de Merville. Miss Winter tries to persuade Miss de Merville, telling her about the wrongdoing of Gruner, but it is useless.
After a while, Watson reads a newspaper on the street saying that Holmes was attacked. According to the newspaper, Holmes has been seriously injured by an assault which was made by two ruffians armed with sticks. Watson hurries his way to Baker Street, and he finds that Holmes is heavily wounded in his head. Gruner is evidently behind this crime.
Holmes learns from a newspaper that Gruner is going to the United States. He asks Watson to study Chinese pottery in a hurry.
Watson goes to see Gruner after he acquired a shallow knowledge of Chinese pottery.