Reading Sherlock without a Dictionary. 8 : His Last Bow 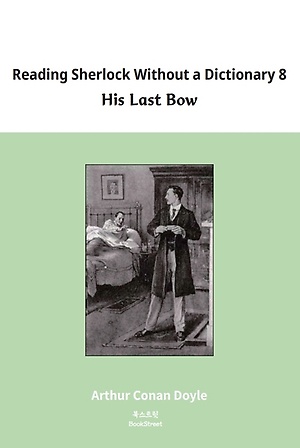 “We walked, and our way took us close to the office. Suddenly he darted away into the fog.” P.143

The Wisteria Lodge
One day in late March 1892, Scott Eccles visits Holmes, followed by Inspector Gregson of Scotland Yard and Inspector Baynes of the Surrey Constabulary. They were investigating the death of Aloysius Garcia, and they followed Eccles because they found his letter in Garcia’s pocket. Eccles recounts his bizarre and unpleasant experience.
Eccles made an acquaintance of Garcia a few weeks ago. Eccles went to Wisteria Lodge yesterday evening in response to Garcia’s invitation. Garcia was living with a Spanish servant and a cook. In the evening, the servant handed a letter to Garcia, and after he read it, Garcia appeared to be agitated. Eccles went to bed about eleven, and after a while, Garcia came to the door and asked if he had rung the bell. Garcia apologized for disturbing him so late, saying that it was nearly one o’clock. When Eccles woke up in the morning, he realized that there was no one in the house.
Inspector Baynes discovered an unburned part of the letter. The letter was sent by a person named D, and there was a cryptic message describing the interior of a house.
Gregson tells them that Garcia was found dead this morning on Oxshott Common, nearly a mile from his house.
Holmes believes that Garcia fabricated his alibi by inviting Eccles and lying to him that it was one o’clock. He also deduces that the house mentioned in the letter is a large one close to Oxshott Common.
Holmes and Watson arrive at Wisteria Lodge along with Inspector Baynes. The place is watched by Walters, the constable. He was utterly terrified because he saw a monstrous man two hours ago. They witness bizarre traces in the house.
Five days later, Holmes and Watson read a news article saying that Baynes arrested the cook who was presumed to be a prime suspect.
Holmes believes that Garcia fabricated his alibi due to a crime he had planned.
The famous old Jacobean grange of High Gable near Oxshott attracts Holmes’s attention. A man named Henderson living in the grange appears to be a foreigner from the tropics, and his friend and secretary, Lucas, is also a foreigner. Holmes notes that both Wisteria Lodge and High Gable have in common that the residents are foreigners. Henderson is a very rich man, and he is employing a governess named Burnet who teaches his two daughters. Holmes gets information from John Warner, the former gardener of High Gable. Holmes speculates that it was Burnet who sent the letter to Garcia. Burnet has disappeared since Garcia’s death, so Holmes determines to take a risk.
Warner rescues Burnett from the villains. Burnett tells her story to them.
Six months later, the tiger of San Pedro meets his end at the Hotel Escurial at Madrid.