Reading Sherlock without a Dictionary 7 : The Return of Sherlock Holmes 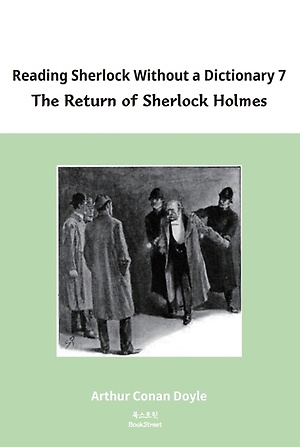 The Return of Sherlock Holmes

“I don’t think I have had the pleasure of seeing you since you favoured me with those attentions as I lay on the ledge above the Reichenbach Fall.” P. 36

Something in his tone caught my ear, and I turned to look at him. P. 72

“What one man can invent another can discover,” P. 119

“Only that it is a remarkable cow which walks, canters, and gallops.” P. 185

Three years have passed since the death of Sherlock Holmes.
Watson recounts the strange incident of Ronald Adair on the night of March 30, 1894.
Adaire who was living at 427, Park Lane, had no enemies and no particular vices. He liked playing cards, but he never went overboard with it. He had played whist in the afternoon that day, and those who had played with him - Mr. Murray, Sir John Hardy, and Colonel Moran - testified that there was nothing peculiar about him. He was shot to death in his room that night, but no weapon was found in the room. His room was locked inside when he met his end. The room was twenty feet high from the ground, and any intrusion through the window seemed very improbable. Furthermore, no one had heard a shot.
In the evening Watson walks to the Oxford Street end of Park Lane to look around the crime scene. He bumps into an old man who stood behind him, and he knocks down the old man’s books. He picks them up and tries to apologize for the accident, but the old man turns on his heels giving him the cold shoulder.
When Watson comes back to his study, to his astonishment, the old man comes to thank him for picking up his books. As the old man remarks on the space of Watson’s bookshelf, Watson looks over the bookshelf. When he turns toward the old man again, there stands his old friend Sherlock Holmes smiling at him.
Holmes explains to Watson how Professor Moriarty met his end at the Reichenbach Falls. He determined that he should not let out his survival to catch the remaining criminals.
When Holmes was climbing up the cliff, a huge rock fell from above and boomed past him. He realized that it was not an accident when he looked up and saw a man’s head against the darkening sky. Another rock narrowly escaped him striking the ledge on which he was resting. Obviously, a subordinate of Moriarty was trying to revenge on him.
Holmes managed to get out of the Reichenbach Falls, and he walked ten miles over the mountains in the darkness. A week later, he arrived in Florence.
Holmes narrates how he has gotten along for the last three years. He is looking into this Park Lane mystery, and he asks for Watson’s help in his investigation.
Holmes and Watson get into the empty house, which stands opposite to their old quarters. They could see a facsimile dummy of Holmes through the window of their old rooms.
Holmes mentions the right-hand man of Moriarty. He had dropped the rocks over the cliff to Holmes, and he is the most dangerous man in London after the demise of Moriarty.