Reading Sherlock without a Dictionary. 6 : The Memoirs of Sherlock Holmes 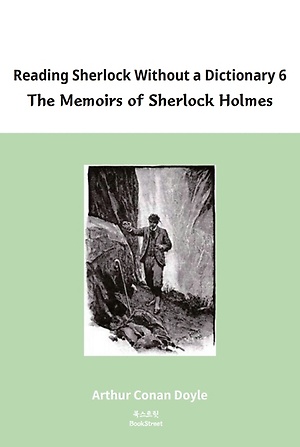 The Memoirs of Sherlock Holmes

“The dog did nothing in the night-time.”
“That was the curious incident,” remarked Sherlock Holmes. P. 42

“I tell you, Watson, in all seriousness, that if I could beat that man, if I could free society of him, I should feel that my own career had reached its summit, and I should be prepared to turn to some more placid line in life.” P. 352

Silver Blaze
One morning, Holmes tells Watson his plan to go to King’s Pyland, Dartmoor. He is about to investigate the disappearance of Silver Blaze, the first favorite for the Wessex Cup, and the tragic murder of its trainer, John Straker. Watson wants to accompany him, so they head to Paddington. Holmes narrates the case on the train.

Colonel Ross, the owner of the horse, took every precaution to protect Silver Blaze at the training stable against any intruders because a lot of people had the strongest interest in preventing Silver Blaze from participating in the race next Tuesday. Three people worked with the trainer, John Straker, and they took turns sitting up each night in the stable. Across the moor from the stable was the training establishment of Capleton, which was managed by Silas Brown.
Last Monday night, a young man, Fitzroy Simpson, tried to spy on the horse at the training stable, but he was driven out from there by the groom, Ned Hunter.
Mrs. Straker woke up at one o’clock in the morning to find his husband preparing to go out. He said that he was worried over the horse and that he would like to look around the training stable.
The next morning, Hunter was found sound asleep, and Silver Blaze was nowhere to be seen. Presumably, someone had put opium in the dish of curried mutton, which was his supper last night. Straker was found dead about a quarter of a mile from the stable. His head had been struck by a heavy blow, and his thigh had been cut by a knife. He held in his left hand the silk cravat which belonged to Simpson. Inspector Gregory arrested Simpson as a prime suspect.

Holmes and Watson arrive at the little town of Tavistock, where they meet Inspector Gregory and Colonel Ross.
Inspector Gregory shows Holmes Straker’s effects. Holmes gets interested in a very singular knife and a milliner’s account among them.
Holmes has a peculiar talk with Mrs. Straker that he had seen her in Plymouth at a garden-party some little time ago.
Holmes finds a burned wax vesta at the crime scene.
Colonel Ross wants to remove his horse’s name from the entries for the Cup, but Holmes persuades him not to do that.
Holmes and Watson head in the direction of Capleton, and they meet Silas Brown.
Holmes unravels this mysterious case with a few clues, such as the curried mutton of the night and the curious incident of the dog in the night-time.