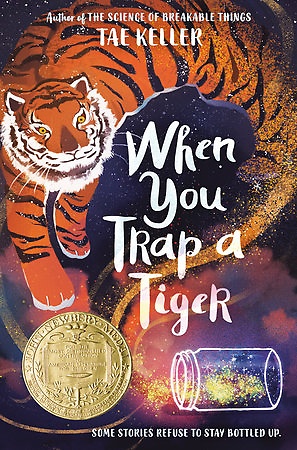 Would you make a deal with a magical tiger? This uplifting story brings brings Korean folklore to life as a girl goes on a quest to unlock the power of stories and save her grandmother.

Some stories refuse to stay bottled up...

When Lily and her family move in with her sick grandmother, a magical tiger straight out of her halmoni's Korean folktales arrives, prompting Lily to unravel a secret family history. Long, long ago, Halmoni stole something from the tigers. Now they want it back. And when one of the tigers approaches Lily with a deal--return what her grandmother stole in exchange for Halmoni's health--Lily is tempted to agree. But deals with tigers are never what they seem! With the help of her sister and her new friend Ricky, Lily must find her voice...and the courage to face a tiger.

Tae Keller, the award-winning author of The Science of Breakable Things, shares a sparkling tale about the power of stories and the magic of family. Think Walk Two Moons meets Where the Mountain Meets the Moon!

"If stories were written in the stars ... this wondrous tale would be one of the brightest." --Booklist, Starred Review

Moving with her parents into the home of her sick grandmother, young Lily forges a complicated pact with a magical tiger, in a story inspired by Korean folktales. By the author of The Science of Unbreakable Things. Simultaneous eBook.

When Lily, her sister Sam, and their mother move in with her sick grandmother, Lily traps a tiger and makes a deal with him to heal Halmoni.