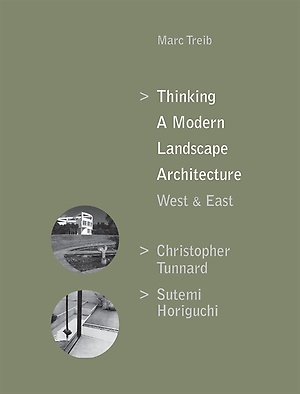 The complex story of modern landscape architecture remains to be written, as does its precise definition. Thinking a Modern Landscape Architecture, West and East, written by one of the field?s most prolific and insightful authors, provides a rare cross-cultural study that examines the written and design contributions made by two of the movement?s most influential early protagonists: Christopher Tunnard (1910?1979) in England?and later the United States, and Sutemi Horiguchi (1896?1984) in Japan. Tunnard?s pioneering manifesto, Gardens in the Modern Landscape, first published in 1938, laid out the thinking and provided the direction for a landscape architecture engaged more strongly with contemporary life, adopting ideas from modern art as well as the historical gardens of Japan. Rather than a book, it was the architect Horiguchi?s 1934 essay ?The Garden of Autumn Grasses? that initiated a new direction for garden making in Japan, with a considered and artful use of seasonal plants and a stronger connection to the modern architecture it accompanied. Unlike Tunnard, who sought inspiration and sources in contemporary art, Horiguchi looked to the eighteen-century Rimpa School of painting for insights into the composition of the new garden by carefully placing individual plants against a simple background. Although the two theorists-practitioners never met, Tunnard?s interest in Japan, and use of Horiguchi?s work as illustrations, links them in a shared quest for a landscape architecture appropriate to their times and respective countries.Lavishly illustrated with 150 historical and contemporary photos and drawings, Thinking a Modern Landscape Architecture, West and East: Christopher Tunnard and Sutemi Horiguchi offers the first compressive study into their thinking, landscape designs, and consequent influence on landscape architecture in the years that followed.