The Lost City of the Monkey God : A True Story[Paperback] 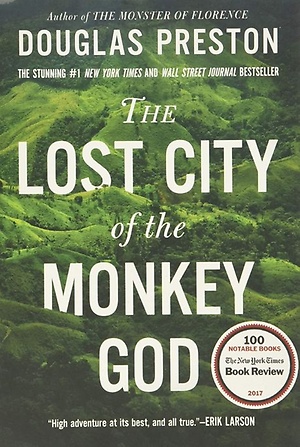 "Preston builds a compelling case for the scientific significance of what the expedition unearthed....The year may still be young, but I would wager a small fortune that Douglas Preston has already written the best snake-decapitation scene of 2017....The book's most affecting moments [center] on the otherworldly nature of the jungle itself....Memoirs of jungle adventures too often devolve into lurid catalogs of hardships [but] Preston proves too thoughtful an observer and too skilled a storyteller to settle for churning out danger porn. He has instead created something nuanced and sublime: a warm and geeky paean to the revelatory power of archaeology....Few other writers possess such heartfelt appreciation for the ways in which artifacts can yield the stories of who we are."―The New York Times Book Review

"A well-documented and engaging read...The author's narrative is rife with jungle derring-do and the myriad dangers of the chase."―USA Today

"Deadly snakes, flesh-eating parasites, and some of the most forbidding jungle terrain on earth were not enough to deter Douglas Preston from a great story."―The Boston Globe

"This modern-day archeological adventure and medical mystery reads as rapidly as a well-paced novel, but is a heart-pounding true story."―Shelf Awareness, Starred Review

"A captivating real-life adventure tale... Preston deftly explains the science behind this work and makes it exciting."―Science News

"Be prepared to turn the pages furiously as the heart of every adventurer is opened wide by the thrilling journey outlined in THE LOST CITY OF THE MONKEY GOD."―The Bookreporter

"A swift and often hair-raising account... Preston pushes "The Lost City of the Monkey God" well beyond the standard adventure narrative."―The Chicago Tribune

"Packed with the power of realism and history unfolding."―The Star Ledger

A Best Book of 2017 from the Boston Globe

A Favorite Science Book of 2017 from Science News


A five-hundred-year-old legend. An ancient curse. A stunning medical mystery. And a pioneering journey into the unknown heart of the world's densest jungle.

Since the days of conquistador Hern?n Cort?s, rumors have circulated about a lost city of immense wealth hidden somewhere in the Honduran interior, called the White City or the Lost City of the Monkey God. Indigenous tribes speak of ancestors who fled there to escape the Spanish invaders, and they warn that anyone who enters this sacred city will fall ill and die. In 1940, swashbuckling journalist Theodore Morde returned from the rainforest with hundreds of artifacts and an electrifying story of having found the Lost City of the Monkey God-but then committed suicide without revealing its location.


Three quarters of a century later, bestselling author Doug Preston joined a team of scientists on a groundbreaking new quest. In 2012 he climbed aboard a rickety, single-engine plane carrying the machine that would change everything: lidar, a highly advanced, classified technology that could map the terrain under the densest rainforest canopy. In an unexplored valley ringed by steep mountains, that flight revealed the unmistakable image of a sprawling metropolis, tantalizing evidence of not just an undiscovered city but an enigmatic, lost civilization.


Venturing into this raw, treacherous, but breathtakingly beautiful wilderness to confirm the discovery, Preston and the team battled torrential rains, quickmud, disease-carrying insects, jaguars, and deadly snakes. But it wasn't until they returned that tragedy struck: Preston and others found they had contracted in the ruins a horrifying, sometimes lethal-and incurable-disease.


Suspenseful and shocking, filled with colorful history, hair-raising adventure, and dramatic twists of fortune, THE LOST CITY OF THE MONKEY GOD is the absolutely true, eyewitness account of one of the great discoveries of the twenty-first century.