In the Shadows of the American Century : The Rise and Decline of US Global Power[Paperback] 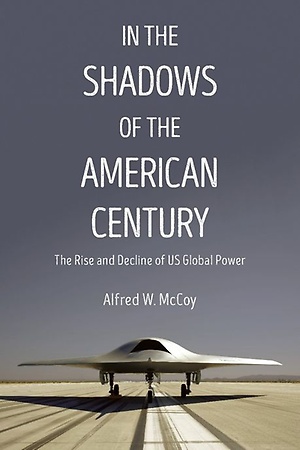 In the Shadows of the American Century persuasively argues for the inevitable decline of the American empire and the rise of China. Whether or not one is a believer in American power, the case that Alfred McCoy makes-that much of America’s decline is due to its own contradictions and failures-is a sad one. He provides a glimmer of hope that America can ease into the role of a more generous, more collaborative, if less powerful, world player. Let’s hope that Americans will listen to his powerful arguments." -Viet Thanh Nguyen, Pulitzer Prize-winning author of the Sympathizer

1.) Chapter 1: "U.S. Global Power and Me"
PART I: Understanding the U.S. Empire
2.) Chapter 2: "America's Ascent to Global Dominion"
3.) Chapter 3: "America and the Dictators"
4.) Chapter 4: "Covert Operations and Global Control"
5.) Chapter 5: "America's Opium War in Afghanistan"
PART II: U.S. Strategies for Survival
6.) Chapter 6: "Global Surveillance State"
7.) Chapter 7: "Torture and aImperial Decline"
8.) Chapter 8: "Beyond Bayonets and Battleships: The Pentagon's Wonder Weapons"
PART III: Dynamics of U.S. Decline
9.) Chapter 9: "The Geopolitics of China's Challenge"
10.) Chapter 10: "Grandmaster of the Great Game"
11.) Chapter 11: "Four Scenarios for the End of the American Century by 2030"
"One of our best and most underappreciated historians takes a hard look at the truth of our empire, both its covert activities and the reasons for its impending decline," --Oliver Stone

In a completely original analysis, prize-winning historian Alfred W. McCoy explores America’s rise as a world power-from the 1890s through the Cold War-and its bid to extend its hegemony deep into the twenty-first century through a fusion of cyberwar, space warfare, trade pacts, and military alliances. McCoy then analyzes the marquee instruments of US hegemony-covert intervention, client elites, psychological torture, and worldwide surveillance.

Peeling back layers of secrecy, McCoy exposes a military and economic battle for global domination fought in the shadows, largely unknown to those outside the highest rungs of power. Can the United States extend the “American Century” or will China guide the globe for the next hundred years? McCoy devotes his final chapter to these questions, boldly laying out a series of scenarios that could lead to the end of Washington’s world domination by 2030.