Gulliver's Travels : Based on the 1726 Text: Contexts, Criticism[Paperback] 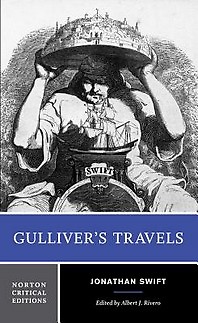 As featured on PBS’s The Great American Read

This new edition of Swift's satiric classic is based on the 1726 text―the edition textual scholars now consider the most authoritative.

It is accompanied by detailed explanatory annotations.

"Contexts" collects materials that influenced Swift's writing of the novel, as well as documents that suggest its initial reception, including Swift's correspondence, Alexander Pope's poems on Gulliver's Travels, and relevant passages from Gargantua and Pantagruel.

A Chronology and a Selected Bibliography are included.