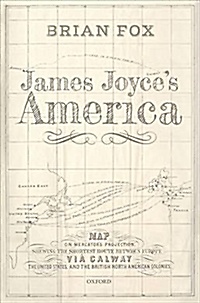 A study of James Joyce's attitude to American history, politics, and culture and the importance of America in Finnegan's Wake.

James Joyce's America is the first study to address the nature of Joyce's relation to the United States. It challenges the prevalent views of Joyce as merely indifferent or hostile towards America, and argues that his works show an increasing level of engagement with American history, culture, and politics that culminates in the abundance of allusions to the US in Finnegans Wake, the very title of which comes from an Irish-American song and signals the importance of America to that work. The volume focuses on Joyce's concept of America within the framework of an Irish history that his works obsessively return to. It concentrates on Joyce's thematic preoccupation with Ireland and its history and America's relation to Irish post-Famine history. Within that context, it explores first Joyce's relation to Irish America and how post-Famine Irish history, as Joyce saw it, transformed the country from a nation of invasions and settlements to one spreading out across the globe, ultimately connecting Joyce's response to this historical phenomenon to the diffusive styles of Finnegans Wake. It then discusses American popular and literary cultures in terms of how they appear in relation to, or as a function of, the British-Irish colonial context in the post-Famine era, and concludes with a consideration of how Joyce represented his American reception in the Wake.