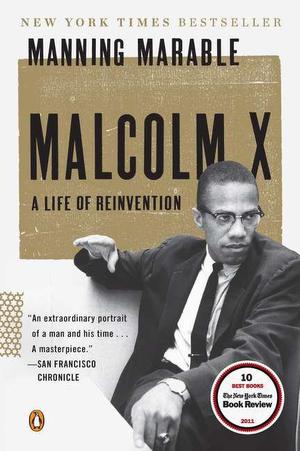 “An extraordinary portrait of a man and his time. . . . A masterpiece.”
- San Francisco Chronicle

THE LATE MANNING MARABLE'S acclaimed biography of Malcolm X finally does justice to one of the most influential and controversial figures of twentieth-century American history. Filled with startling new information and shocking revelations, Malcolm X unfolds a sweeping story of race and class in America. Reaching into Malcolm's troubled youth, it traces a path from his parents' activism as followers of Marcus Garvey through his own work with the Nation of Islam and rise in the world of black nationalism, and culminates in the never-before-told true story of his assassination. Malcolm X is a stunning achievement, the definitive work on one of our greatest advocates for social change.

MANNING MARABLE (1950?2011) was the founding director of African American studies at Columbia University and the director of Columbia's Center for Contemporary Black History. He authored fifteen books and was also the editor of the quarterly journal Souls.