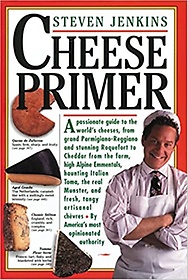 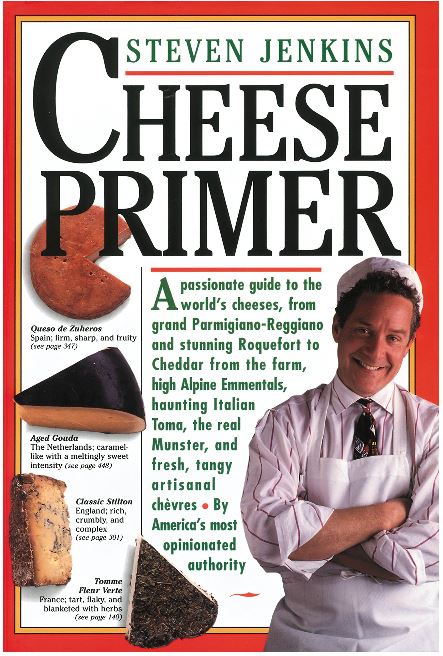 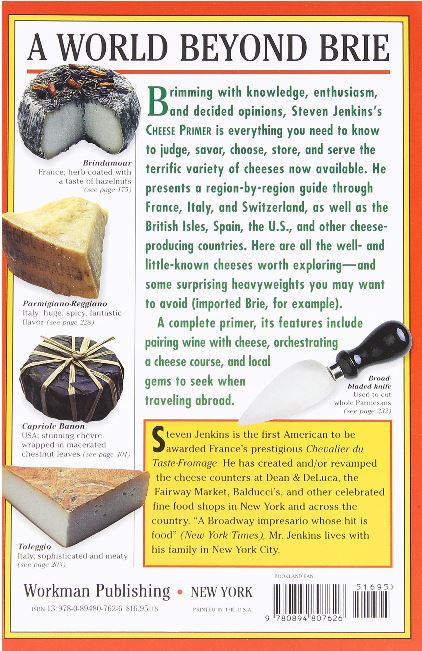 If you want a fascinating food book, say Cheese Primer. For 20 years, Steve Jenkins has lead the way in upgrading the quality of cheese sold at fine food stores in the U.S. Finally, in this volume, he shares his encyclopedic knowledge. Jenkins tells all about cheesemaking at the commercial as well as the artistic level. Generously punctuated with maps and photos, the book includes all kinds of historical and other relevant information. Jenkins seems to describe every kind of cheese made in the U.S. and Europe, including when to eat them, how and with what. His passion and blunt opinions make it easy to travel the 548 pages of this book if you have even the smallest interest in cheese. The guide to pronunciation is particularly helpful.

"Once ripened... the inner cheese becomes liquescent, bone-colored, and extraordinarily flavorful... nutty, beefier, and woody, with hints of peat, like a single malt Scotch from Islay. The cheese is tumescent, glistening." It may be cheese to you, but to Jenkins it's a perfect Teleme California cheese originally made by Greek immigrants. In 1973, Jenkins moved to New York City from Missouri to pursue dreams of acting?which explains how he came to run the cheese department at two of New York's gourmet meccas, Dean & DeLuca and Fairway. The first American invited into the the Guilde de St. Uguzon and a Chevalier du Taste-Fromage, Jenkins is really a missionary. After a lesson in cheesemaking from which readers can truly understand why washing the rind or cheddaring makes the end product taste different, Jenkins examines, country by country, the great cheeses of France, Italy, Switzerland, Spain, Britain, the U.S. and, in one fell swoop, Canada and the rest of the European cheese-making countries.
He describes how they are found, served and what makes them great?or not. "Bel Paese," he notes, "is immensely popular because it is very mild (read bland)... I don't recommend it to my customers under any circumstances for any purpose." He takes a similarly unrelenting posture towards young Goudas or Provolones, but most of his ire is aimed at the mass produced cheeses and the misguided government regulations, like the USFDA's refusal to allow the importation of raw milk cheeses aged less than 60 days, that keep Americans ignorant of some of the world's great cheeses. Hence, this volume becomes partly a travel book as Jenkins urges Americans abroad to sample the forbidden. With unflagging enthusiasm and a seemingly endless reserve of information (much offered in boxes and sidebars),
The author combines the romance and legend of an ancient craft with addresses, names, recipes and other hard facts. Jenkins employs prose as gloriously redolent, seductive and irresistible as his favorite cheeses to demonstrate how sight, smell and touch can be marshaled in the service of taste. Illustrations not seen by PW. BOMC featured alternate; 15-city author tour
Great Cheese book
This is a great book - packed with more than any one person could possibly ever want to know about cheese. Jenkins e starts out the book very well, giving you basics about cheese: the different kinds, how to serve it, how to store it, which to choose and which not to choose, how each of the different groups of cheese are made, etc.

I read every page of the beginning of the book. The author is a complete cheese-freak...which is good. He knows a lot. But the one thing I wish he'd done is take into consideration us normal mortals a bit. I can't afford to pay huge amounts for cheese, and I don't live in NY near an awesome cheese shop. In fact, I don't really have a cheese shop except at the fancier grocery store in town - which does have a decent cheese counter.