Kamal Musallam - Out Of My City (CD) 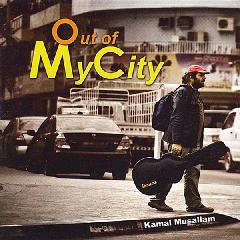 The new CD, Out Of My City, is, he says, 'a continuation of my first album from five years ago, which also had a fusion sound. I've always been trying to lay Arabic music over jazz, funk and jazz-rock sounds.' However, this musical melange, while distinctive and catchy, has given Kamal no end of headaches when people ask him to describe his music. 'This question of genre is always hard to answer because genres have been signposted by media people and not by musicians themselves. Some people call it Arabic jazz, some call it fusion or modern Eastern music. It's probably best to call it Arabic jazz,' he concludes, noting that 'jazz is the free world of music and if we apply it's principles here then you have Arabic jazz. It has a deep beats in it like jazz-rock, but it has a lot of Arabic style. 'Ever since I was a teenager I have been listening to Western pop, rock and jazz, and also Arabic music, so I try to fuse those things together,' he continues. It seems appropriate, then, that Kamal should have made his home in Dubai, an area of the Middle East that is almost unique in it's wide mix of races, cultures and nationalities. In fact, he says, the city has actually shaped his music in the six years he's been living in it: 'Since I moved here,' Kamal explains, 'I have been exposed to a lot of other influences - especially a lot of Indian music - and I have brought all of this together in one box to create a reflection of my experiences and my years in Dubai.' Not that his music should merely be considered a pastiche: 'It is like I have learned some words and phrases from all these different people, but I am still constructing my own grammar,' the musician says. 'The elements are borrowed, but the sound is my own.'