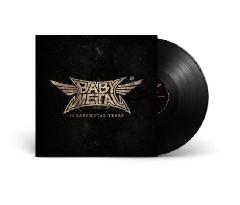 “10 BABYMETAL YEARS” is the first ultimate collection of highlights taken from BABYMETAL’s three studio albums BABYMETAL (2014), METAL RESISTANCE (2016) and METAL GALAXY (2019) and it gives an excellent overview on one decade of Metal.

“10 BABYMETAL YEARS” does not only offer an excellent summary of this one-of-a-kind career, but it also presents supreme international guest-artists. The song “PA PA YA!!” has been refined by the Thai rapper F.HERO, while “Distortion” features a guest performance by vocalist Alissa White-Gluz from Arch Enemy. Further to that Dragonforce, one of the bands that are considered to be a big influence on the Japanese metal phenomenon, took the chance to collaborate with BABYMETAL with guitarist Herman Li enhancing the track “Road Of Resistance” with his guitar skills.

In the first 10 years the band has achieved an outstanding amount of success around the world with hundreds of millions of audio streams, and almost a billion YouTube views. They played to 110,000 people over the course of two nights at the massive TOKYO DOME, supported Red Hot Chili Peppers on their UK/US arena tour along with additional support slots with Metallica in South Korea and Guns N' Roses in Japan, followed by 4 total days in Japan in 2019 with BRING ME THE HORIZON as BABYMETAL’s guest act.
In February 2020, BABYMETAL embarked on their full European headline run consisting of 17 dates in 11 countries.

Formed in Japan in 2010, the band began, supported by the so-called Kami-Band, their mission to unify the world through Heavy Metal by creating a fusion of heavy metal and the Japanese pop genre.

Their music contains a stunning mix of electronic pop, a pinch of alternative and industrial rock and is levelled up by fast driven heavy metal. Their live shows are ground-breaking and epic visual as well as sound performances.