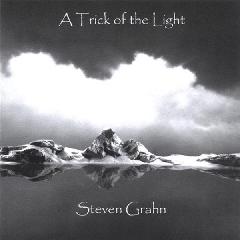 Every piece on this recording is a tapestry of sound linked by the common thread of guitar and flute. Steven has made music of the utmost quality, pure of spirit and heart. Spectral Man to So Far You're So Far Away you will be taken away to magical places. His music evokes emotion and genuine feeling in the listener - nothing is compromised for the pleasure of the senses! Journey with 'A Trick of the Light' through Asia, Ireland, Australia and North America. Fly over vast canyons of color and wade in cool jade waters. New Age Reporter Reviewer RJ Lannon says: 'Except for the expressions of gratitude to the teckies and project manager, Steven wore all the hats that it takes to make an outstanding recording. The name of the album is A Trick of the Light and it is a musical illusion worth trying to catch. The package that the CD came in is in simple black & white, but the contents are in brilliant, musical Technicolor.' Steven Grahn is a lifelong musician with eclectic taste. He started as a youth with a guitar and a lot of musical passion. In college he stretched himself to become a concert flutist and composer. He studied composition at San Fransisco State University and he graduated from California State University at Humboldt with a BA in music for alto saxophone and flute. He is now a multi-instrumentalist who has played Rock, Country, Blues, and most recently, Celtic, music professionally. This CD of original compositions is a convergence of the styles of music he listens to, including: Rock and Blues (Eric Clapton, Van Morrison, Muddy Waters, Little Feat), African and world beat (Habib Koite and Bamada, Kwela Tbza, Donald Kachamba), Tibetan (Nawang Khechong), and Celtic (Enya, Clannad, and a variety of traditional players). Musically, this is almost completely a solo project. Steven wrote and arranged the songs, played the instruments, programmed the parts, and, whatever the format, recorded and mixed the tracks. Some of the older songs were recorded at his house using four track recorders and sequencers. Some songs were recorded at Tally Studio, a 24 track digital tape-based facility. The rest of the songs were recorded on a PC running Cakewalk Pro Audio and Sonar.