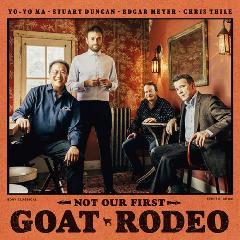 Both sets of Goat Rodeo sessions combine the talents of the four solo artists, each a Grammy Award-winning talent in his own right, to create a singular sound that's part composed, part improvised, and uniquely American. The music is so complex to pull off that the group likens it to a goat rodeo -- an aviation term for a situation in which 100 things need to go right to avoid disaster. Both the first album and the new recording also feature the voice and artistry of singer-songwriter and fellow Grammy Award-winner Aoife O'Donovan, who rejoins the group as a guest on Not Our First Goat Rodeo.

The new release builds on 2011's genre-defying The Goat Rodeo Sessions, which debuted at No. 1 on Billboard's Classical, Classical Crossover, and Bluegrass charts and remained at No. 1 for 11 weeks on the Bluegrass chart. Marking Yo-Yo Ma's highest debut on the Billboard Top 200 albums chart, the release went on to break into the chart's top 20 albums, where it peaked at No. 18. NPR's World Cafe called the album, which received GRAMMY Awards for Best Folk Album and Best Engineered Album, Non-Classical, "organic yet composed in a way that only four deeply talented, in-tune musicians could make it," with traces of, "Appalachia[n], Chinese, classical, Celtic, and jazz influences. If there was ever an album -- or an unlikely band -- that embodies the word 'eclectic,' this is it."