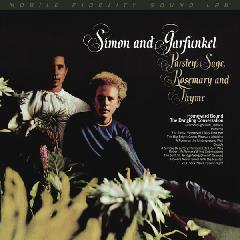 The liner notes pioneering writer Ralph J. Gleason penned for the back cover of Simon and Garfunkel's Parsley, Sage, Rosemary and Thyme ring as true now as they did upon the record's original release in 1966. He mused: 'Today's popular music is in good shape indeed-at least the portion of it represented by this album. It has strength and it has beauty, it has lyricism, meaning, and, above all, that quality of broad appeal which still retains form. And it's music speaks for more than the moment. The songs in this album

are songs for all time.' Indeed, they are, and they can now be experienced in the highest fidelity they've ever enjoyed. Reflecting the perfectionist-minded nature of Bob Johnston's meticulous production and the group's painstaking arrangements, Mobile Fidelity's reissues bring to light textures, nuances, details, and microdynamics obscured on prior editions. Harmonies crest and seemingly float on clouds. Acoustic passages blossom with lifelike structure. The intent of deliberate euphonic variations is made clear.
Such punctiliousness is exactly what the duo pursued during their four months in the studio, considered then by record-company executives to be borderline excessive. But as these editions attest like never before, there's no arguing with the results of a benchmark Rolling Stone named the 202nd Greatest Album of All Time.