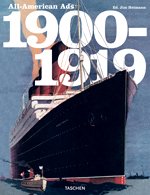 The dawn of consumerism: when ads were works of art


A far cry from the aggressive ads we’ve become used to, American print advertisements from the first two decades of the 20th century were almost shockingly pleasant. Intricately designed and beautifully illustrated, often in the art nouveau style popular at the time, four-color, full-page magazine advertisements were welcome respites from the bland, text-filled pages among which they appeared. Sales pitches were earnest and friendly; beer, for example, was billed as “The Evening Glass of Cheer” and toothpaste was described as “Delicious Ribbon Dental Cream”?perhaps not the catchiest slogans, but they were on to something. The American consumerist boom of the 20th century was just beginning and advertising was getting its sea legs. From motorcars to hair tonics to steamship cruises to Coca-Cola (“After the theatre drink a glass… it relieves fatigue”), America was peddling its wares in style and setting an example of how to advertise in the modern age. This exhaustive compendium of ads from the period?many of which haven’t been seen for over eight decades?is a fascinating reminder of surprisingly simpler times and a rediscovery of a forgotten age in advertising history.