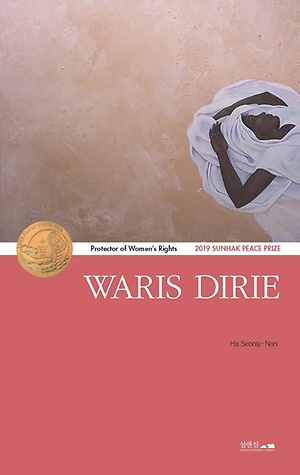 Born into a goat-herding nomad family in Somalia, she underwent female circumcision at the age of 5. In 1997, when her fashion career as a world-class supermodel was at its peak, she revealed her experience with FGM as a representative of all African women who had undergone the procedure and couldn’t tell anyone their story. This brave start led her to become a human rights activist to end the barbaric practice that are thriving in Africa.
She was then appointed as a first Special Ambassador to the United Nations for the Elimination of Female Genital Mutilation in 1997. Since then, she has been putting tireless efforts in anti-FGM Campaign.

From Contents
In 2013, Waris founded Desert Flower Centers for victims of FGM in Paris, Berlin and Stockholm with medical teams comprised of 120 people. The centers provide psychological and physical treatment for victims, including reconstructive surgery. In addition, the centers educate professionals, civilsociety groups, NGO staff and social workers to expand the supportive network for FGM victims.
FGM is usually done at home or outdoors without any medical device. When a girl or woman undergoes FGM, there is a high chance of getting an obstetric fistula, an abnormal opening between the genital tract and urinary tract. People with an obstetric fistula can suffer from incontinence of urine or feces, causing various infections, extreme menstrual cramps and obstructed labor, which also can lead to infertility. The Desert Flower Centers have much experience treating the aftereffects of FGM and are the perfect place for victims to go for support, instead of a hospital. However, Waris knew that it is not easy for many victims to travel to a center.

about Waris Dirie
(born 1965) is a Somali model, author, actress and human rights activist in the fight against Female Genital Mutilation (FGM). From 1997 to 2003, she served as a UN special ambassador against female genital cutting. In 2002 she founded her own organization in Vienna (Austria), the Desert Flower Foundation.
Her first name Waris means desert flower. When she was five, she herself suffered circumcision in the form of Infibulation. As a result of her efforts, 15 African Union member countries ratified the Maputo Protocol, which in Article 5 lists FGM as a harmful practice that must be ended. In 2012, the United Nations General Assembly unanimously passed a resolution banning the practice and has set a goal to eliminate FGM by 2030. This in novative milestone saved the lives of millions of girls who were at the risk the violent practice.
Desert Flower(1998), Desert Dawn(2002), Desert Children(2005), Letter to my mother(2007), Schwarze Frau, weißes Land(2010), Saving Safa(2013), My Africa-The Journey(2017)

part 1 IN THE DESERT

The Desert Flower Foundation ㆍ 155
Tradition or Pure Violence? ㆍ 169
Desert Flowers Blooming in Sierra Leone ㆍ 177
I Am Not a Cinderella ㆍ 187