Diary of a Murderer : And Other Stories[Paperback] 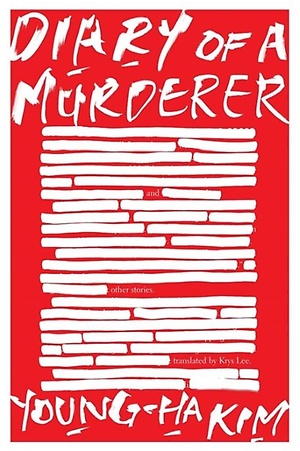 "This is celebrated Korean writer Young-ha Kim’s first story collection to be translated into English, and it is filled with the kind of sublime, galvanizing stories that strike like a lightning bolt, searing your nerves. The titular novella follows a reformed serial killer who has given himself one more target?a man who is set to murder his daughter. The stakes of the other stories aren’t any lower and involve kidnappings and affairs, trauma and transcendence. It’s easy enough to see why Kim has won every Korean literature award and is acclaimed as the best writer of his generation; pick up this book and find out for yourself."-NYLON, "50 Books You'll Want to Read in 2019"

“Kim is expert at finding the humanity inside the other, the comedy inside the tragedy, and the twisted within the seemingly normal. In his short story collection Diary of A Murder, the titular novella guides us through the deteriorating mind of a serial killer as he tries to save his daughter from becoming victim to another killer in town before he succumbs to Alzheimer’s, while subsequent short stories showcasing an O. Henry-level irony mixed with an Italo Calvino style of humanism.”-CrimeReads, "The Most Anticipated Crime Books of 2019"

"In the title novella of the collection, an elderly man considers coming out of retirement for one last job to save his daughter from the fianc? he believes wants to murder her. He’s not a retired detective or a bodyguard, though; he’s a former serial killer. The last story, 'The Writer,' opens with an anecdote about a man who is convinced he is a corncob. Needless to say, I’m already beguiled."-Huffington Post, "61 Books We’re Looking Forward To Reading In 2019"

"These tales of obsession reverberate with the hard, cool, and dryly comic voice of one of South Korea's most versatile writers . . . Creeping anxiety and Kafkaesque humor meld in [the] deceptively intricate novella...The other three stories retain the first one's chilliness (sustained nicely with help from Lee's translation) . . . A lively, enthralling introduction to [Kim's] eclectic artistry."-Kirkus Reviews

"This dark, innovative story collection from Kim is rife with grim plots and unreliable narrators . . . The best stories are engrossing and disturbing, and are excellent showcases of Kim’s talent.."-Publishers Weekly

“Filled with the kind of sublime, galvanizing stories that strike like a lightning bolt, searing your nerves . . . It’s easy enough to see why Kim . . . is acclaimed as the best writer of his generation; pick up this book and find out for yourself.” - Nylon

Diary of a Murderer captivates and provokes in equal measure, exploring what it means to be on the edge-between life and death, good and evil. In the titular novella, a former serial killer suffering from memory loss sets his sights on one final target: his daughter’s boyfriend, who he suspects is also a serial killer. In other stories we witness an affair between two childhood friends that questions the limits of loyalty and love; a family’s disintegration after a baby son is kidnapped and recovered years later; and a wild, erotic ride about pursuing creativity at the expense of everything else.
From “one of South Korea’s best and most worldly writers” (NPR), Diary of a Murderer is chilling and high-powered all the way through.

“Kim is expert at finding the humanity inside the other, the comedy inside the tragedy, and the twisted within the seemingly normal.” - CrimeReads