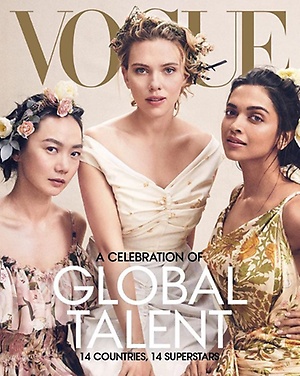 Photographed by Mikael Jansson, Vogue, April 2019
Doona Bae, South Korea
Bae says she’s “not like K-pop stars?they have no privacy. I’m an actor.” She blooms in shoes and a two-tone ensemble by Marc Jacobs.

The South Korean actress Doona Bae insists that her life at home is, by contrast, pretty low-key. “No one bothers me,” she says with a shrug. “It’s not like K-pop stars?they have no privacy. I’m an actor.” Still, pull at the threads and this picture of quiet anonymity begins to unravel. Bae never takes taxis in Seoul, because she doesn’t want the drivers to know where she lives.

The daughter of a stage actress, Bae is a serious performer. (“I watched Crazy Rich Asians on the plane,” she says. “It was kind of decent.”) The Korean film industry is thriving, and she has worked with some of the best directors in Asia?not just Koreans like Park Chan-wook (who recently directed the AMC adaptation of John le Carre’s The Little Drummer Girl) but also Japanese directors like Hirokazu Kore-eda (his masterful Shoplifters was nominated for an Oscar this year), for whom she played an uncanny inflatable sex doll in Air Doll (2009). She’s crossed over with Tom Tykwer and the Wachowski sisters’ Cloud Atlas and worked with the Wachowskis on their TV series Sense8. In 2006, she starred in The Host, the highest-grossing Korean film to that date. Shrinking with embarrassment, Bae has to admit that her life is “basically what all millennials would probably dream about.”