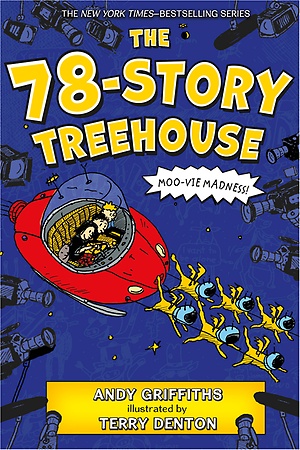 New York Times bestselling author Andy Griffiths invites readers to come hang out with him and his friend Terry in their 78-Story Treehouse―the sixth book in the illustrated chapter book series filled with Andy and Terry's signature slapstick humor!

Andy and Terry live in a 78-story treehouse. (It used to be a 65-story treehouse, but they just keep building more levels!) It has a drive-thru car wash, a courtroom with a robot judge called Edward Gavelhead, a scribbletorium, a combining machine, an ALL-BALL sports stadium, a high-security potato chip storage facility, and an open-air movie theatre with a super-giant screen . . . which is a very useful thing to have now that Terry’s going to be a big-shot movie star!

After Andy gets cut out of the movie, he and Terry have a big fight and decide they don’t want to be best friends anymore. But with a herd of sneaky spy cows out to steal all their story ideas, can Andy and Terry make up before it’s too late?

Praise for the Treehouse series:

"Will appeal to fans of Jeff Kinney and Dav Pilkey. . . . The wonderfully random slapstick humor is tailor-made for reluctant readers. . . . A treat for all." ―Booklist on The 13-Story Treehouse

"Twice the treehouse, twice the fun? You bet. . . . Denton's furiously scrawled line drawings milk the silly, gross-out gags for everything they're worth. Kids should be flipping pages faster than a pair of inflatable underpants can skyrocket the young heroes to safety." ―Publishers Weekly, starred review, on The 26-Story Treehouse