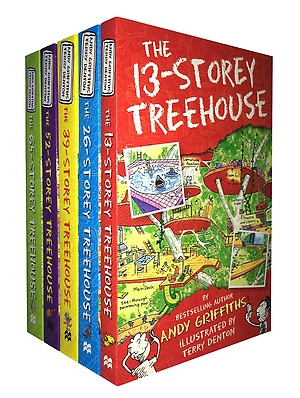 Amazingly anarchic, marvellously madcap and destined to have the entire family chuckling away, Andy Griffiths' five-book 13- (and much taller!) Storey Treehouse Collection is a must for fans of Barry Loser, David Walliams and Diary of a Wimpy Kid.


Andy and Terry live in the world's greatest treehouse. In first book The 13-Storey Treehouse, it houses a giant catapult, a tank of man-eating sharks and a marshmallow machine that shoots marshmallows at you whenever you're hungry... it's extended into The 26-Storey Treehouse for the second book in the series and houses an ice-cream-serving robot called Edward Scooperhands; while in The 39-Storey Treehouse the building has a scary roller coaster, a light-up dance floor and a boxing elephant named the Trunkinator added to it!