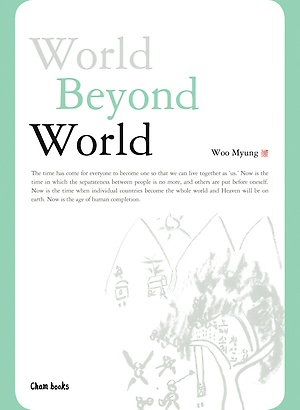 Introduction to the book

Written after Maum meditation method was developed, this book includes contents of his lectures to philosophers, theologians, and leaders of various religions and answers to many questions raised by them.

"At the time, I proposed the most fundamental solution to ending all of the world's conflicts; through cleansing of people's minds and changing their consciousness to the Truth consciousness, the world's nations could be together as one and live as one without differences between people." - an excerpt from the book

As he writes in the preface, the author states the fundamental solution to end the world's endless struggles is to become one with Truth through cleansing mind. And in the book, he succinctly explains about mind, Truth, human, and the logic of the Universe. He writes that true valuable achievement of a human being is to become Truth; and he enlightens us on why one needs to be Truth and how one can become Truth.

Because Truth is a topic which transcends any religion and it is a philosophic task for the humanity, the author explains about Truth by frequently using scriptures and principles of religious beliefs to increase the readers' understanding. One of the excellent aspects of this book is that it explains the profound logic in a very simple and easy way.

Since publishing the first edition in September of 2003, this book ranked first as a bestseller in philosophy category of Kyobo books and also was listed as a bestseller in an internet bookstore. Due to the popularity, its first English edition became available in May of 2005. As a steady seller in philosophy and spirituality categories, this book received continued attention and thusly now, the book is being newly published in the revised edition.

After the author wrote Book of Wisdom, World Beyond World was a second book written which explained in depth the logic of the Universe, Truth, human, and God in a simple manner. The title of this book, World Beyond World, refers to the world of God where all are one, the world which exists 'when self and this world do not exist.'

The world of human completion is the world where all are one, without separateness of you or me, and your country or my country. It is where no conflicts or wars exist, but an ideal world where everyone trusts and helps each other without worries or concerns. The author emphasizes this kind of world isn't just an idea, but can be realized when human mind transforms into the Universe mind. It is because one can know the logic of the Universe and live with wisdom and the nature's flow, through escaping individual self to become the Universe mind that is Truth. The world peace which everyone wishes for can be realized when true peace starts in inner aspect of every human being. The author enlightens us that the most precious and valuable is one becoming a complete being that is Truth, which is the very reason and purpose we were born.

1.The Mind Is The Whole Of The Universe
oHow To Become Truth
oHow Can We Reach Truth And Why Must We Become It?

2. The World Beyond
oThe Age Of Human Completion o Eternal Life And Heaven o Is It Possible For
A Person To Reach Completion Through Repentance Within Religion? oSaint oWhat Is The Mind? o How To Cleanse The Mind o The Messiah And The Rapture
o Prayer o Sin o To Believe In God Or Buddha / ...

3.The Land Of Light
oThe Embodiment Of The Mind Is Existence o Rest And Find Truth So That You
May Live As Truth o Come Be Born In True Paradise And Live Herein o A Life
Of Heaven o Rise From Your Graves o Truth o Only Man Is Dead o Let
Us Cast Away Our Delusions And Live With The True Jung And Shin oTo Die Means To Be Truth And To Be God o Our Land I o The Truth Wanderer / ...

Appendix
oA Special Dialogue Between Woo Myung And Reverend Joe Gattis On Truth
And The Universe oQ&A On The Mind, Truth, And Maum Meditation

This world and the next are not separate but one to a person who has reached
human completion. He lives as it is without discernment, he lives life but not in
it, and he is free because his self no longer exists.
To live absent of one's self is liberation. A person who has reached completion
is one who has neither sin nor karma because one's self does not exist, and such
a person lives eternally in the Land of completion.
He who has reached completion is a person who no longer exists and so he has no pain or suffering; furthermore, he lives in great repose because his self does
not exist - or in other words, because he has no mind towards anything. Yet at
the same time, he has everything and is thus able to live accumulating his
blessings in Heaven; such a person is one who is complete.
('The age of human completion'/ p.34)

A truly ordinary mind is the Mind of God, which is the Universe, itself. It is the mind of the pure emptiness that exists as it is without discernment of what is or is not and of what is right or wrong; it is a mind, absent of life and death. This mind is one that does not change and remains as it is; it is the great Mind of the Universe, which is God. It is the mind of one who has returned to the Mind of God.
('The ordinary mind is the Way'/ p.69)

The Mind is not of non-existence but existence. Because the Mind exists, both Heaven and earth exist. He who has existence - the living true mind - will live in Heaven, and because he is the true Mind, he will know no death. The Universe is the Mind, and this Universe exists consisting of the 'Jung (Body)' and 'Shin (Mind).' He who no longer has his self and has been reborn as the God of purity no longer has his own mind. This means that because he no longer has his mind, he has the Mind of the Universe - the great Mind - and this Mind is the Mind of God or Buddha. The Mind is absent of everything; it just exists as it is, disconnected from everything. Yet in this Mind, there is the Body and Mind - the Jung and Shin - of the Universe, which is why the Mind is the world of Buddha and the Kingdom of God. Only he who has let go of everything can become the Mind itself, and only he is able to be born into eternal Heaven.
('The Mind is not non-existent but existent, which is why the world exists'/pp.210~211)

Woo Myung, bestselling author of many books about Truth, attained enlightenment after deep introspection about life and existence. When he became Truth, he dedicated his life to teaching others to become Truth and founded Maum Meditation. For his efforts, he was awarded the Mahatma Gandhi Peace Award by the United Nations International Association of Educators for World Peace (IAEWP) in September 2002. Woo Myung has also been appointed as a United Nations World Peace Ambassador.

He is the author of numerous books includin g World Beyond World, The Way To Become A Person In Heaven While Living, Where You Become True Is The Place Of Truth, Mind, and Nature’s Flow which have been published in English. His other books, Heaven’s Formula For Saving The World, The Living Eternal World, The Book Of Wisdom, and The Enlightened World are in the process of being translated into English as well as Chinese, French, German, Italian, Japanese, Portuguese, Spanish and Swedish.