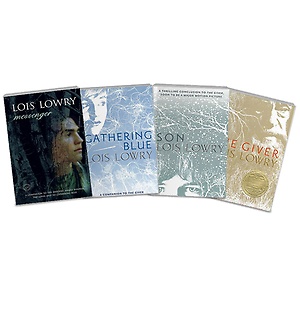 Lois Lowry’s Messenger continues the quartet beginning with the quintessential dystopian novel, The Giver, and Gathering Blue, followed by Son.
For the past six years, Matty has lived in Village and flourished under the guidance of Seer, a blind man, known for his special sight. Village was a place that welcomed newcomers, but something sinister has seeped into Village and the people have voted to close it to outsiders. Matty has been invaluable as a messenger. Now he must make one last journey through the treacherous forest with his only weapon, a power he unexpectedly discovers within himself.

Lois Lowry won her first Newbery Medal in 1994 for The Giver. Six years later, she ushered readers back into its mysterious but plausible future world in Gathering Blue to tell the story of Kira, orphaned, physically flawed, and left with an uncertain future. This second book in the Giver Quartet has been stunningly redesigned in paperback.

As she did in The Giver and later Messenger, in Gathering Blue Lois Lowry challenges readers to imagine what our world could become, how people could evolve, and what could be considered valuable.
펼쳐보기

They called her Water Claire. When she washed up on their shore, no one knew that she came from a society where emotions and colors didn't exist. That she had become a Vessel at age thirteen. That she had carried a Product at age fourteen. That it had been stolen from her body. Claire had a son. But what became of him she never knew. What was his name? Was he even alive? She was supposed to forget him, but that was impossible. Now Claire will stop at nothing to find her child, even if it means making an unimaginable sacrifice. Son thrusts readers once again into the chilling world of the Newbery Medal winning book, The Giver,as well as Gathering Blue and Messenger where a new hero emerges. In this thrilling series finale, the startling and long-awaited conclusion to Lois Lowry's epic tale culminates in a final clash between good and evil.

The Giver, the 1994 Newbery Medal winner, has become one of the most influential novels of our time. The haunting story centers on twelve-year-old Jonas, who lives in a seemingly ideal, if colorless, world of conformity and contentment. Not until he is given his life assignment as the Receiver of Memory does he begin to understand the dark, complex secrets behind his fragile community. Lois Lowry has written three companion novels to The Giver, including Gathering Blue, Messenger, and Son.
펼쳐보기