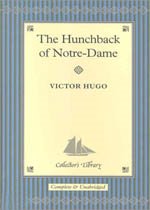 A tremendous, emotionally stirring tragedy, The Hunchback of Notre-Dame features one of the most striking creations in all of fiction-Quasimodo, the hideously deformed bellringer or Notre-Dame de Paris during the turbulent final years of the fifteenth century. Rejected with disgust by all except the priest Claude Frollo, who took him in when the mob would have killed himm, Quasimodo rescues the beautiful gypsy La Esmeralda, condemned for a crime she did not commit, and brings her to the sanctuary of the cathedral. But Quasimodo's beloved master, the superbly conceived arch-villain Frollo, has been corrupted by an obsessive lust for the girl. Only the true-hearted but reviled simpleton Quasimodo can hope to save her from Frollo's malevolent schemes. In the course of this compelling tale, Victor Hugo brilliantly captures the spirit of an age.