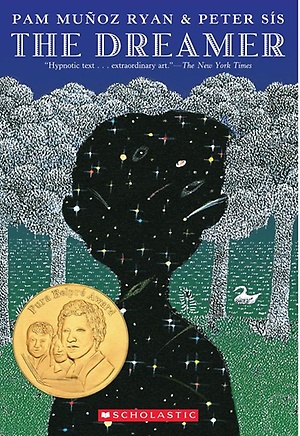 Awards and Praise for The Dreamer:

*" This book has all the feel of a classic, elegant and measured, but deeply rewarding and eminently readable." -- Booklist, starred review

"Ryan's hypnotic text, inspired by the childhood of Pablo Neruda, is brought to life by the extraordinary art of Peter Sis."- New York Times Book Review

"A phantasmagorical rumination on the childhood of the great Chilean poet Pablo Neruda is rooted in a belief that words possess the power to mend the spirit and change the world."--Smithsonian Notable List

From the time he is a young boy, Neftal? hears the call of a mysterious voice. Even when the neighborhood children taunt him, and when his harsh, authoritarian father ridicules him, and when he doubts himself, Neftal? knows he cannot ignore the call. He listens and follows as it leads him under the canopy of the lush rain forest, into the fearsome sea, and through the persistent Chilean rain on an inspiring voyage of self-discovery that will transform his life and, ultimately, the world.

Combining elements of magical realism with biography, poetry, literary fiction, and transporting illustrations, Pam Mu?oz Ryan and Peter S?s take readers on a rare journey of the heart and imagination as they explore the inspiring early life of the poet who became Pablo Neruda.