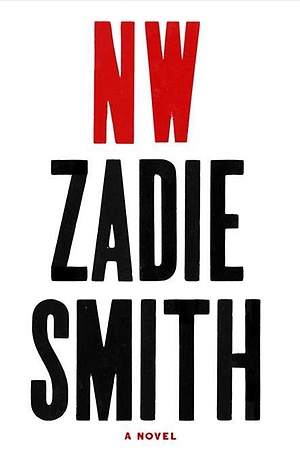 A new novel from Zadie Smith, set in Northwest London

Somewhere in Northwest London stands Caldwell housing estate, relic of 70s urban planning. Five identical blocks, deliberately named: Hobbes, Smith, Bentham, Locke, and Russell. If you grew up here, the plan was to get out and get on, to something bigger, better. Thirty years later ex-Caldwell kids Leah, Natalie, Felix, and Nathan have all made it out, with varying degrees of success?whatever that means. Living only streets apart, they occupy separate worlds and navigate an atomized city where few wish to be their neighbor's keeper. Then one April afternoon a stranger comes to Leah's door seeking help, disturbing the peace, and forcing Leah out of her isolation. . . .

From private houses to public parks, at work and at play, in this delicate, devastating novel of encounters, the main streets hide the back alleys, and taking the high road can sometimes lead to a dead end. Zadie Smith's NW brilliantly depicts the modern urban zone?familiar to city dwellers everywhere?in a tragicomic novel as mercurial as the city itself.

1.
The fat sun stalls by the phone masts. Anticlimb paint turns sulfurous on school gates and lampposts. In Willesden people go barefoot, the streets turn European, there is a mania for eating outside. She keeps to the shade. Redheaded. On the radio: I am the sole author of the only dictionary that defines me. A good line?write it out on the back of a magazine. In a hammock, in the garden of a basement flat. Fenced in, on all sides.
Four gardens along, in the estate, a grim girl on the third floor screams Anglo-Saxon at nobody. Juliet balcony, projecting for miles. It ain't like that. Nah it ain't like that. Don't you start. Fag in hand. Fleshy, lobster red.
I am the sole
I am the sole author
Pencil leaves no mark on magazine pages. Somewhere she has read that the gloss gives you cancer. Everyone knows it shouldn't be this hot. Shriveled blossom and bitter little apples. Birds singing the wrong tunes in the wrong trees too early in the year. Don't you bloody start! Look up; the girl's burned paunch rests on the railing like a separate animal. As Michel has it: not everyone can be invited to the party. Not this century. Cruel opinion?she doesn't share it. In marriage not everything is shared. Yellow sun high in the sky. Blue cross on white stick, clear, definitive. Michel is at work. He is still at work.
I am the
the sole
Ash drifts into the garden below, then comes the butt, then the box. Louder than the birds and the trains and the traffic. Sole sign of sanity: a tiny device tucked in the ear. I told im stop takin liberties. Where's my check? And she's in my face chattin breeze. Fuckin liberty.
I am the sole. The sole. The sole
She unfurls her fist, lets the pencil roll. Takes her liberty. Nothing else to listen to but this bloody girl. At least with eyes closed there is something else to see. Viscous black specks. Darting water boatmen, zigzagging. Zig. Zag. Red river? Molten lake in hell? The hammock tips. The Sundays flop to the ground. World events and property and film and music lie in the grass. Also sport and the short descriptions of the dead.

2.
Doorbell! She stumbles through the grass barefoot, sun-huddled, drowsy. The back door leads to a poky kitchen, tiled brightly in the taste of a previous tenant. The bell is not simply being rung. It is being held down.
In the double glazing, a body, blurred. Wrong collection of pixels to be Michel. Between her body and the door, the hallway, golden in reflected sun. Floorboards like wheat fields seen from a plane.
This hallway can only lead to good things. Yet a woman is screaming PLEASE and crying. A woman thumps the front door with her fist. Pulling the lock aside, she finds it stops halfway, the chain pulls tight, and the woman's hand flies through the gap.

ZADIE SMITH was born in Northwest London in 1975. She is the author of White Teeth, The Autograph Man, On Beauty, and the essay collection Changing My Mind.