The Return of the King : The Lord of the Rings #3 (Paperback / Reprinted Ed./ 영국판) [Paperback] 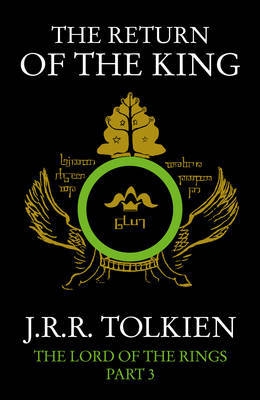 The final part of Tolkien’s epic masterpiece, The Lord of the Rings, now in B format paperback with a black cover based on Tolkien’s own design.

The climactic volume of the trilogy, wherein the little hobbit and his trusty companions make a terrible journey to the heart of the land of the Shadow in a final reckoning with the power of Sauron.

Impossible to describe in a few words, JRR Tolkien’s great work of imaginative fiction has been labelled both a heroic romance and a classic fantasy fiction. By turns comic and homely, epic and diabolic, the narrative moves through countless changes of scene and character in an imaginary world which is totally convincing in its detail. Tolkien created a vast new mythology in an invented world which has proved timeless in its appeal.

[The Return of the King : The Lord of the Rings #3 (Paperback / Reprinted Ed./ 영국판)]의 데이터 요약정보