Guns, Germs, and Steel : The Fates of Human Societies[Paperback] 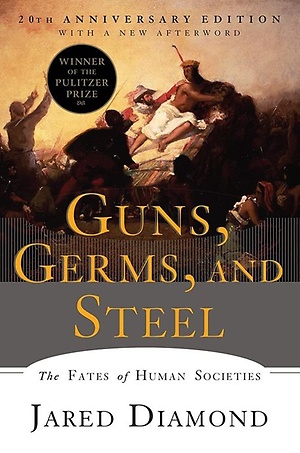 * Winner of the Pulitzer Prize, the Phi Beta Kappa Award in Science, the Rhone-Poulenc Prize, and the Commonwealth Club of California's Gold Medal


"Diamond has written a book of remarkable scope . . . one of the most important and readable works on the human past published in recent years."- Colin Renfrew, Nature

"The scope and explanatory power of this book are astounding."- The New Yorker

"Serious, groundbreaking biological studies of human history only seem to come along once every generation or so. . . . Now [Guns, Germs, and Steel] must be added to their select number. . . . Diamond meshes technological mastery with historical sweep, anecdotal delight with broad conceptual vision, and command of sources with creative leaps. No finer work of its kind has been published this year, or for many past."- Martin Sieff, Washington Times

"[Diamond] is broadly erudite, writes in a style that pleasantly expresses scientific concepts in vernacular American English, and deals almost exclusively in questions that should interest everyone concerned about how humanity has developed. . . . [He] has done us all a great favor by supplying a rock-solid alternative to the racist answer. . . . A wonderfully interesting book."- Alfred W. Crosby, Los Angeles Times

"An epochal work. Diamond has written a summary of human history that can be accounted, for the time being, as Darwinian in its authority."- Thomas M. Disch, The New Leader

"Guns, Germs and Steel lays a foundation for understanding human history, which makes it fascinating in its own right. Because it brilliantly describes how chance advantages can lead to early success in a highly competitive environment, it also offers useful lessons for the business world and for people interested in why technologies succeed." - Bill Gates

"No scientist brings more experience from the laboratory and field, none thinks more deeply about social issues or addresses them with greater clarity, than Jared Diamond as illustrated by Guns, Germs, and Steel. In this remarkably readable book he shows how history and biology can enrich one another to produce a deeper understanding of the human condition."- Edward O. Wilson, Pellegrino University Professor, Harvard University

"A fascinating and extremely important book. That its insights seem so fresh, its facts so novel and arresting, is evidence of how little Americans?and, I suspect, most well-educated citizens of the Western world?know of the most important forces of human history."- David Brown, Washington Post Book World

Chapter Page
Preface to the Paperback Edition: Why Is World History Like an Onion? 9
Prologue Yali's Question The regionally differing courses of history 13
Part 1 From Eden To Cajamarca
Chapter 1 Up to the Starting Line What happened on all the continents before 11,000 B.C.? 35
Chapter 2 A Natural Experiment of History How geography molded societies on Polynesian islands 52
Chapter 3 Collision at Cajamarca Why the lnca emperor Atahuallpa did not capture King Charles I of Spain 65
Part 2 The Rise and Spread of Food Production
Chapter 4 Farmer Power The roots of guns, germs, and steel 81
Chapter 5 History's Haves and Have-Nots Geographic differences in the onset of food production 89
Chapter 6 To Farm or Not to Farm Causes of the spread of food production 100
Chapter 7 How to Make an Almond The unconscious development of ancient crops 109
Chapter 8 Apples Or Indians Why did peoples of some regions fail to domesticate plants? 126
Chapter 9 Zebras, Unhappy Marriages, and the Anna Karenina Principle Why were most big wild mammal species never domesticated? 151
Chapter 10 Spacious Skies and Tilted Axes Why did food production spread at different rates on different continents? 169
Part 3 From Food to Guns, Germs, and Steel
Chapter 11 Lethal Gift of Livestock The evolution of germs 187
Chapter 12 Blueprints and Borrowed Letters The evolution of writing 206
Chapter 13 Necessity's Mother The evolution of technology 229
Chapter 14 From Egalitarianism to Kleptocracy The evolution of government and religion 254
Part 4 Around the World in Six Chapters
Chapter 15 Yali's People The histories of Australia and New Guinea 283
Chapter 16 How China Became Chinese The history of East Asia 308
Chapter 17 Speedboat to Polynesia The history of the Austronesian expansion 320
Chapter 18 Hemispheres Colliding The histories of Eurasia and the Americas compared 339
Chapter 19 How Africa Became Black The history of Africa 361
Chapter 20 Who Are the Japanese? The history of Japan 386
Epilogue The Future of Human History as a Science 409
2017 Afterword: Rich and Poor Countries in Light of Guns, Germs, and Steel 433
Acknowledgments 445
Further Readings 447
Credits 475
Index 477

Societies that had had a head start in food production advanced beyond the hunter-gatherer stage, and then developed religion --as well as nasty germs and potent weapons of war --and adventured on sea and land to conquer and decimate preliterate cultures.

A major advance in our understanding of human societies, Guns, Germs, and Steel chronicles the way that the modern world came to be and stunningly dismantles racially based theories of human history.

Winner of the Pulitzer Prize, the Phi Beta Kappa Award in Science, the Rhone-Poulenc Prize, and the Commonwealth club of California's Gold Medal.