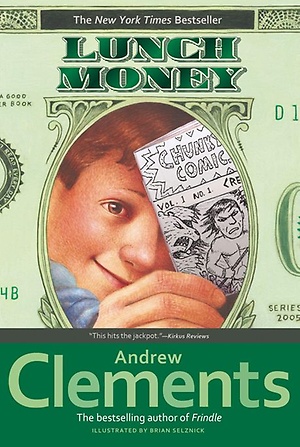 Greg Kenton has always had a natural talent for making money ? despite the annoying rivalry of his neighbor Maura Shaw. Then, just before sixth grade, Greg makes a discovery: Almost every kid at school has an extra quarter or two to spend almost every day.

Multiply a few quarters by a few hundred kids, and for Greg, school suddenly looks like a giant piggy bank. All he needs is the right hammer to crack it open. Candy and gum? Little toys? Sure, kids would love to buy stuff like that at school. But would teachers and the principal permit it? Not likely.

But how about comic books? Comic books might work. Especially the chunky little ones that Greg writes and illustrates himself. Because everybody knows that school always encourages reading and writing and creativity and individual initiative, right?

In this funny and timely novel, Andrew Clements again holds up a mirror to real life, and invites young readers to think about money, school, friendship, and what it means to be a success.

It was near the end of his fifth-grade year. Around eleven thirty one morning during silent reading Greg felt hungry, so he had started to think about his lunch: a ham-and-cheese sandwich, a bag of nacho cheese Doritos, a bunch of red grapes, and an apple-cherry juice box.

His mom had made him a bag lunch, which was fine with Greg. Making a lunch was a lot cheaper than buying one, and Greg loved saving money whenever possible. Plus home food was usually better than school food. And on days he brought a bag lunch his mom also gave him fifty cents to buy dessert. Which was also fine with Greg. Sometimes he bought a treat, and sometimes he held on to the money. On this particular day he had been planning to spend both quarters on an ice-cream sandwich.

Then Greg remembered where his lunch was: at home on the kitchen counter. He did have a dollar of his own money in his wallet, and he had two quarters from his mom in his front pocket, but a whole school lunch cost two bucks. He needed two more quarters.

So Greg had walked to the front of the classroom, waited until his teacher looked up from her book, and then said, "Mrs. McCormick, I left my lunch at home. May I borrow fifty cents?"

Mrs. McCormick had not missed a teaching opportunity in over twenty years. So she shook her head, and in a voice loud enough for the whole class to hear, she said, "I'm sorry, but no, I will not lend you money. Do you know what would happen if I handed out fifty cents to all the boys and girls who forgot their lunches? I'd go broke, that's what. You need to learn to remember these things for yourself."

Then, turning to the class, Mrs. McCormick had announced, "Greg needs some lunch money. Can someone lend him fifty cents?"

Over half of the kids in the class raised a hand.

Embarrassed, Greg had hurried over to Brian Lemont, and Brian handed him two quarters.

"Thanks," Greg said. "Pay you back tomorrow."

Ten minutes later Greg was in the cafeteria line, shaking all four quarters around in his pocket. They made a nice clinking sound, and that had reminded Greg how much he liked quarters. Stack up four, and you've got a dollar. Stack up twenty quarters, and that's five dollars. Greg remembered one day when he had piled up all his quarters on his dresser -- four stacks, and each had been over a foot tall. Stacking up quarters like that always made Greg feel rich.

So on that day in April of his fifth-grade year, Greg had started looking around the cafeteria, and everywhere he looked, he saw quarters. He saw kids trading quarters for ice-cream sandwiches and cupcakes and cookies at the dessert table. He saw kids over at the school store trading quarters for neon pens and sparkly pencils, and for little decorations like rubber soccer balls and plastic butterflies to stick onto the ends of those new pencils. He saw Albert Hobart drop three quarters into a machine so he could have a cold can of juice with his lunch. Kids were buying extra food, fancy pens and pencils, special drinks and snacks. There were quarters all over the place, buckets of them.

And then Greg remembered those hands that had been raised back in his classroom, all those kids who'd had a couple of quarters to lend him -- extra quarters.

Excited, Greg had started making some calculations in his head -- another one his talents. There were about 450 fourth, fifth, and sixth graders at Ashworth Intermediate School. If even half of those kids had two extra quarters to spend every day, then there had to be at least four hundred quarters floating around the school. That was a hundred dollars a day, over five hundred dollars each week -- money, extra money, just jingling around in pockets and lunch bags!
펼쳐보기

MEET GREG KENTON, BILLIONAIRE IN THE MAKING. Greg Kenton has two obsessions -- making money and his long-standing competition with his annoying neighbor, Maura Shaw. So when Greg discovers that Maura is cutting into his booming Chunky Comics business with her own original illustrated minibooks, he's ready to declare war. The problem is, Greg has to admit that Maura's books are good, and soon the longtime enemies become unlikely business partners. But their budding partnership is threatened when the principal bans the sale of their comics in school. Suddenly, the two former rivals find themselves united against an adversary tougher than they ever were to each other. Will their enterprise -- and their friendship -- prevail?