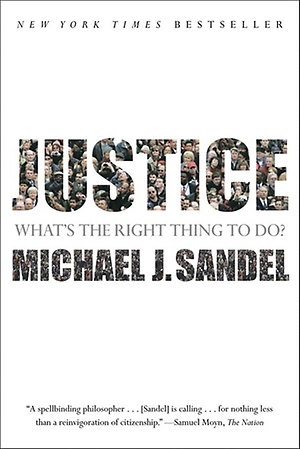 “[Sandel] The most famous teacher of philosophy in the world [has] shown that it is possible to take philosophy into the public square without insulting the public's intelligence.” -Michael Ignatieff, The New Republic

“Michael Sandel. . . is currently the most effective communicator of ideas in English.” -The Guardian

“This book is absolutely indispensable for anyone who wants to be a good citizen. It shows how to balance competing values, a talent our nation desperately needs nowadays.” -Walter Isaacson, author of Benjamin Franklin: An American Life

“More than exhilarating; exciting in its ability to persuade this student/reader, time and again, that the principle now being invoked--on this page, in this chapter--is the one to deliver the sufficiently inclusive guide to the making of a decent life.” -Vivian Gornick, Boston Review

“Sandel explains theories of justice . . . with clarity and immediacy; the ideas of Aristotle, Jeremy Bentham, Immanuel Kant, John Stuart Mill, Robert Nozick and John Rawls have rarely, if ever, been set out as accessibly . . . In terms we can all understand, Justice confronts us with the concepts that lurk, so often unacknowledged, beneath our conflicts.” -Jonathan Rauch, The New York Times

In the summer of 2004, Hurricane Charley roared out of the Gulf of Mexico and swept across Florida to the Atlantic Ocean. The storm claimed twenty-two lives and caused $11 billion in damage. It also left in its wake a debate about price gouging.

At a gas station in Orlando, they were selling two-dollar bags of ice for ten dollars. Lacking power for refrigerators or air-conditioning in the middle of August, many people had little choice but to pay up. Downed trees heightened demand for chain saws and roof repairs. Contractors offered to clear two trees off a homeowner's roof-for $23,000. Stores that normally sold small household generators for $250 were now asking $2,000. A seventy-seven-year-old woman fleeing the hurricane with her elderly husband and handicapped daughter was charged $160 per night for a motel room that normally goes for $40.

Many Floridians were angered by the inflated prices. "After Storm Come the Vultures," read a headline in USA Today. One resident, told it would cost $10,500 to remove a fallen tree from his roof, said it was wrong for people to "try to capitalize on other people's hardship and misery." Charlie Crist, the state'sattorney general, agreed: "It is astounding to me, the level of greed that someone must have in their soul to be willing to take advantage of someone suffering in the wake of a hurricane."

Florida has a law against price gouging, and in the aftermath of the hurricane, the attorney general's office received more than two thousand complaints. Some led to successful lawsuits. A Days Inn in West Palm Beach had to pay $70,000 in penalties and restitution for overcharging customers.

But even as Crist set about enforcing the price-gouging law, some economists argued that the law-and the public outrage-were misconceived. In medieval times, philosophers and theologians believed that the exchange of goods should be governed by a "just price," determined by tradition or the intrinsic value of things. But in market societies, the economists observed, prices are set by supply and demand. There is no such thing as a "just price."

Thomas Sowell, a free-market economist, called price gouging an "emotionally powerful but economically meaningless expression that most economists pay no attention to, because it seems too confused to bother with." Writing in the Tampa Tribune, Sowell sought to explain "how 'price gouging' helps Floridians." Charges of price gouging arise "when prices are significantly higher than what people have been used to," Sowell wrote. But "the price levels that you happen to be used to" are not morally sacrosanct. They are no more "special or 'fair' than other prices" that market conditions-including those prompted by a hurricane-may bring about.

Higher prices for ice, bottled water, roof repairs, generators, and motel rooms have the advantage, Sowell argued, of limiting the use of such things by consumers and increasing incentives for suppliers in far-off places to provide the goods and ser vices most needed in the hurricane's aftermath. If ice fetches ten dollars a bag when Floridians are facing power outages in the August heat, ice manufacturers will find it worth their while to produce and ship more of it. There is nothing unjust about these prices, Sowell explained; they simply reflect the value that buyers and sellers choose to place on the things they exchange.
펼쳐보기

"For Michael Sandel, justice is not a spectator sport," The Nation's reviewer of Justice remarked. In his acclaimed book-based on his legendary Harvard course-Sandel offers a rare education in thinking through the complicated issues and controversies we face in public life today. It has emerged as a most lucid and engaging guide for those who yearn for a more robust and thoughtful public discourse. "In terms we can all understand," wrote Jonathan Rauch in The New York Times, Justice "confronts us with the concepts that lurk . . . beneath our conflicts."

Affirmative action, same-sex marriage, physician-assisted suicide, abortion, national service, the moral limits of markets-Sandel relates the big questions of political philosophy to the most vexing issues of the day, and shows how a surer grasp of philosophy can help us make sense of politics, morality, and our own convictions as well.

Justice is lively, thought-provoking, and wise-an essential new addition to the small shelf of books that speak convincingly to the hard questions of our civic life.