Formation and Evolution of Black Holes in the Galaxy [Paperback] 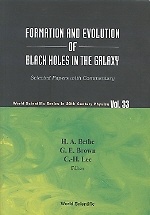 In published papers H.A. Bethe and G.E. Brown worked out the collapse of large stars and supernova explosions. They went on to evolve binaries of compact stars, finding that in the standard scenario the first formed neutron star always went into a black hole in common envelope evolution. C.J. Lee joined them in the study of black hole binaries and gamma ray bursts. They found the black holes to be the fossils of the gamma ray bursts. From their properties they could reconstruct features of the burst and of the accompanying hypernova explosions. This work contains 23 papers on astrophysics, chiefly on compact objects, written over 23 years. The papers are accompanied by an explanatory commentary. In addition there is an appendix on kaon condensation, which the editors believe to be relevant to the equation of state in neutron stars, and to explain why black holes are formed at relatively low masses.