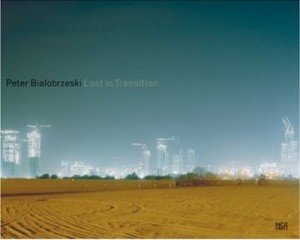 In Heimat, his previous collection of photographs published by Hatje Cantz, German photographer Peter Bialobrzeski, born in 1961, gave us pictures of his homeland that showed it as it had never been seen before. Photo International deemed it "one of the most beautiful and significant photography books this year." Even before that, Bialobrzeski's critically acclaimed exploration of the Asian mega-city phenomenon, Neon Tigers, had made him a common topic of debate on the international photography scene. Bialobrzeski's gift is for the portrayal of epic sweep in urban vistas, and of the energies that inhabit and galvanize them. In Lost in Transition the photographer applies his grand vision to the transformation of wasteland areas, many of which are located on the peripheries of cities. The photographs were taken in more than 28 cities (including Hamburg, Dubai, New York, Singapore, New Delhi and Kuala Lumpur) and 14 countries, and trace the transition from old to new, from the familiar to the abstract, from the dilapidated to the renewed. These images are as seductive and sublime as nineteenth-century Romantic paintings, but their apparent beauty is deceptive. As in his earlier works, Bialobrzeski always tests and pushes at the limitations of the documentary image itself.