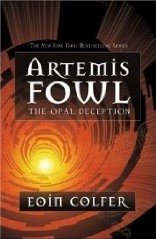 This fourth outing for Eoin Colfer’s teenage criminal mastermind, Artemis Fowl, is--as ever--full of dramatic action, explosions, treachery, high speed chases, windy escapes from Trolls and a generous helping of fairy magic. There are plenty of laughs amidst the action and more new technical gizmos than you could fit into James Bond’s latest car. At the end of Artemis Fowl: The Eternity Code, Artemis was left with his memory erased of all previous dealings with the fairy folk, any underground realms he may have visited, a certain LEPrecon police officer called Holly Short he may have been acquainted with--even the flatulent, burrowing, kleptomaniac dwarf, Mulch Diggums. Everything. It was part of the deal he struck when he helped save the fairies and they aided his rescue of Fowl Snr. from captivity. But, having been accused of a heinous crime, Holly now needs Fowl’s expertise once more to clear her name and save Fairykind from oblivion.
Opal Koboi, the most dangerous pixie who ever lived, has eluded capture and is out for revenge. She’s framed Holly and tried to kill Artemis and his trusty bodyguard Butler. Holly must try to bring Artemis up to speed quickly in order to foil Opal’s dastardly plan to expose the fairies down below to the humans on top.

Like J K Rowling, Colfer has complete mastery over the cast of characters he has created in this popular series of novels. Half of the pleasure of the Harry Potter novels is to be had by simply enjoying how the familiar characters interact--savouring their established foibles and characteristics and revelling in all the new things they get up to. In The Opal Deception, Colfer pairs up his heroes and villains brilliantly and has the same amount of tremendous fun with them. It’s witty and enjoyable and will be appreciated by all.