The Good Pirates of the Forgotten Bayous (Hardcover) 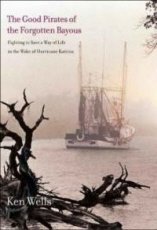 Starred Review. Author and journalist Wells, a native of Louisiana bayou country, was a Wall Street Journal reporter when Katrina struck in 2005. Arguably more horrific than the scene in New Orleans were the bayou parishes, particularly St. Bernard and Plaquemines, where the eye of Katrina came on land. After hitching a National Guard helicopter to St. Bernard Parish, Wells meets Ricky Robin, whose ancestors had been hunting, fishing, and pirating the bayous for over 250 years. Robin became Wells's guide, relating harrowing stories of the storm, as even the parish president and his staff were trapped, their emergency vehicles flooded or washed away entirely; the first outside help to reach them was not FEMA, but a squad of Canadian Mounted Police. Wells also examines the disaster's "unnatural causes," like the Mississippi River-Gulf Outlet, a shipping canal dredged from Lake Pontchartrain to the Gulf of Mexico, which provided an inland channel for the Category 5 storm surge driven by Katrina. Afterwards, the failed levee system prevented filthy, polluted water from draining back to the ocean, turning much of the bayou into a cesspool. Vivid prose, first-hand testimony and solid, heartbreaking reportage make this disaster debrief hard to put down, and worth the attention of every U.S. citizen.

[The Good Pirates of the Forgotten Bayous (Hardcover)]의 데이터 요약정보