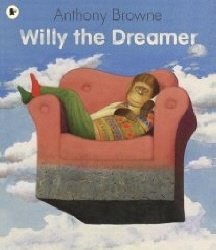 In his fifth book about Willy the chimp, Browne gives a smart, playful nod to Magritte, Rousseau, Dali and other artists whose paintings were often more the stuff of dreams than of real life. Browne's whimsical borrowings and witty visual puns stretch this volume's appeal far beyond the typical picture-book audience. And though Willy's youngest fans may not get the full picture, they'll likely take a naif's pleasure in the dream-like quirks and incongruities packed into each watercolor. Dozing in an armchair, the chimp envisions himself a movie star in guises that include Mary Poppins, Dracula and Charlie Chaplin; a singer who's a ringer for Elvis; a ballet dancer in a lacy tutu and toe shoes fashioned from bananas; a famous writer surrounded by simian versions of Sir John Tenniel's Cheshire Cat, Mad Hatter and other residents of Wonderland. And from the moment they view Browne's fetching cover illustration, kids will keep their eyes peeled for the inventively placed bananas in Willy's dream scenes. A parody of the famous picture inscribed "Ceci n'est pas une pipe" doubles in irreverence when a curved banana half fills in for the pipe; a Cowardly Lion's tail ends in a flourish of banana. Whether readers are wholly untutored or art history experts, the closer they look, the more jokes they will find. Fresh, funny and full of surprises.