Pop Goes Korea (Paperback) : Behind the Revolution in Movies, Music, and Internet Culture 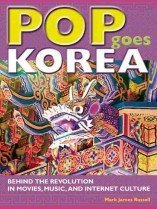 "For a country that traditionally received culture, especially from China but also from Japan and the United States, South Korea finds itself at a turning point in its new role as exporter."-The New York Times

From kim chee to kim chic! South Korea came from nowhere in the 1990s to become one of the biggest producers of pop content (movies, music, comic books, TV dramas, online gaming) in Asia-and the West. Why? Who's behind it? Mark James Russell tells an exciting tale of rapid growth and wild success marked by an uncanny knack for moving just one step ahead of changing technologies (such as music downloads and Internet comics) that have created new consumer markets around the world. Among the media pioneers profiled in this book is film director Kang Je-gyu, maker of Korea's first blockbuster film Shiri; Lee Su-man, who went from folk singer to computer programmer to creator of Korea's biggest music label; and Nelson Shin, who rose from North Korea to the top of the animation business. Full of fresh analysis, engaging reportage, and insightful insider anecdotes, Pop Goes Korea explores the hallyu (the Korean Wave) hitting the world's shores in the new century.