Tales of a Fourth Grade Nothing [Paperback] 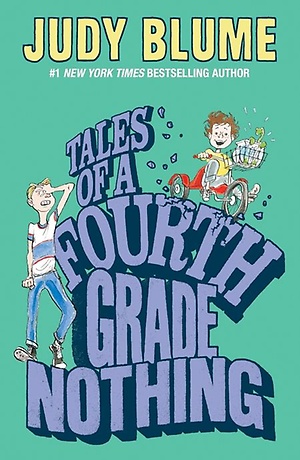 Living with his little brother, Fudge, makes Peter Hatcher feel like a fourth grade nothing.

Whether Fudge is throwing a temper tantrum in a shoe store, smearing smashed potatoes on walls at Hamburger Heaven, or scribbling all over Peter's homework, he's never far from trouble. He's a two-year-old terror who gets away with everything?and Peter's had enough.

When Fudge walks off with Dribble, Peter's pet turtle, it's the last straw. Peter has put up with Fudge too long. How can he get his parents to pay attention to him for a change?


I won Dribble at Jimmy Fargo's birthday party. All the other guys got to take home goldfish in little plastic bags. I won him because I guessed there were three hundred and forty-eight jelly beans in Mrs. Fargo's jar. Really, there were four hundred and twenty-three, she told us later. Still, my guess was closest. "Peter Warren Hatcher is the big winner!" Mrs. Fargo announced.

At first I felt bad that I didn't get a goldfish too. Then Jimmy handed me a glass bowl. Inside there was some water and three rocks. A tiny green turtle was sleeping on the biggest rock. All the other guys looked at their goldfish. I knew what they were thinking. They wished they could have tiny green turtles too.

I named my turtle Dribble while I was walking home from Jimmy's party. I live at 25 West 68th Street. It's an old apartment building. But it's got one of the best elevators in New York City. There are mirrors all around. You can see yourself from every angle. There's a Soft, cushioned bench to sit on if you're too tired to stand. The elevator operator's name is Henry Bevelheimer. He lets us call him Henry because Bevelheimer's very hard to say.

Our apartment's on the twelfth floor. But I don't have to tell Henry. He already knows. He knows everybody in the building. He's that smart! He even knows I'm nine and in fourth grade.

I showed him Dribble right away. I won him at a birthday party," I said.

Henry smiled. "Your mother's going to be surprised."

Henry was right. My mother was really surprised. Her mouth opened when I said, "Just look at what I won at Jimmy Fargo's birthday party." I held up my tiny greenturtle. "I've already named him . . . Dribble! Isn't that a great name for a turtle?"

My mother made a face. "I don't like the way he smells," she said.

"What do you mean?" I asked. I put my nose right down close to him. I didn't smell anything but turtle. So Dribble smells like turtle, I thought. Well, he's supposed to. That's what he is!

"And I'm not going to take care of him either," my mother added.

"You're going to change his water and clean out his bowl and feed him and all of that?" she asked.

This time my mother made a funny noise. Like a groan.

I went into. my bedroom. I put Dribble on top of my dresser. I tried to pet him and tell him he would be happy living with me. But it isn't easy to pet a turtle. They aren't soft and furry and they don't lick you or anything. Still, I had my very own pet at last.

Later, when I sat down at the dinner table, my mother said, "I smell turtle. Peter, go and scrub your hands!"

Some people might think that my mother is my biggest problem. She doesn't like turtles and she's always telling me to scrub my hands. That doesn't mean just run them under the water. Scrub means I'm supposed to use soap and rub my hands together. Then I've got to rinse and dry them. I ought to know by now. I've heard it enough!

But my mother isn't my biggest problem. Neither is my father. He spends a lot of time watching commercials on TV. That's because he's in the advertising business. These days his favorite commercial is the one about Juicy-O. He wrote it himself. And the president of -the Juicy-O company liked it so much he sent my father a whole crate of Juicy-O for our family to drink. It tastes like a combination of oranges, pineapples, grapefruits, pears, and bananas. (And if you want to know the truth, I'm getting pretty sick of drinking it.) But Juicy-O isn't my biggest problem either.

My biggest problem is my brother, Farley Drexel Hatcher. He's two-and-a-half years old. Everybody calls him Fudge. I feel sorry for him if he's going to grow up with a name like Fudge, but I don't say a word. It's none of my business.
펼쳐보기

For the first time in mass market paperback come Fudge, Peter, Shelia, and the rest of the gang from the beloved books by "New York Times" bestselling author Judy Blume.