23 Things They Don't Tell You About Capitalism [Paperback] 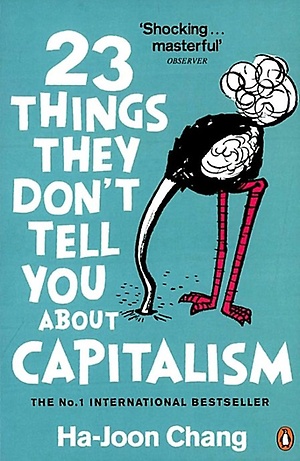 
Markets need to be free. When the government interferes to dictate what market participants can or cannot do, resources cannot flow to their most efficient use. If people cannot do the things that they fi nd most profi table, they lose the incentive to invest and innovate. Thus, if the government puts a cap on house rents, landlords lose the incentive to maintain their properties or build new ones. Or, if the government restricts the kinds of financial products that can be sold, two contracting parties that may both have benefi ted from innovative transactions that fulfil their idiosyncratic needs cannot reap the potential gains of free contract. People must be left ‘free to choose’, as the title of free-market visionary Milton Friedman’s famous book goes.

What they don’t tell you

The free market doesn’t exist. Every market has some rules and boundaries that restrict freedom of choice. A market looks free only because we so unconditionally accept its underlying restrictions that we fail to see them. How ‘free’ a market is cannot be objectively defined. It is a political defi nition. The usual claim by free-market economists that they are trying to defend the market from politically motivated interference by the government is false. Government is always involved and those free- marketeers are as politically motivated as anyone. Overcoming the myth that there is such a thing as an objectively defined ‘free market’ is the first step towards understanding capitalism.


Labour ought to be free

In 1819 new legislation to regulate child labour, the Cotton Factories Regulation Act, was tabled in the British Parliament. The proposed regulation was incredibly ‘light touch’ by modern standards. It would ban the employment of young children ? that is, those under the age of nine. Older children (aged between ten and sixteen) would still be allowed to work, but with their working hours restricted to twelve per day (yes, they were really going soft on those kids). The new rules applied only to cotton factories, which were recognized to be exceptionally hazardous to workers’ health.

The proposal caused huge controversy. Opponents saw it as undermining the sanctity of freedom of contract and thus destroying the very foundation of the free market. In debating this legislation, some members of the House of Lords objected to it on the grounds that ‘labour ought to be free’. Their argument said: the children want (and need) to work, and the factory owners want to employ them; what is the problem? Today, even the most ardent free-market proponents in Britain or other rich countries would not think of bringing child labour back as part of the market liberalization package that they so want. However, until the late nineteenth or the early twentieth century, when the fi rst serious child labour regulations were introduced in Europe and North America, many respectable people judged child labour regulation to be against the principles of the free market......(후략)
펼쳐보기

In 23 Things They Don't Tell You About Capitalism one of today's most iconoclastic thinkers destroys the biggest myths about the world we live in.

This galvanizing, fact-packed book about money, equality, freedom and greed proves that the free market isn't just bad for people - it's an inefficient way of running economies too. Here Chang lays out the alternatives, and shows there's a better way.