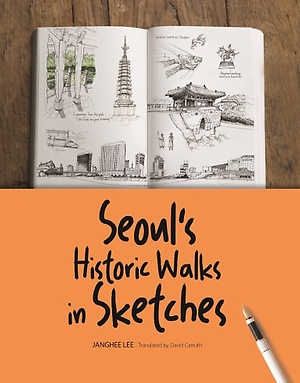 Seoul is a rapidly changing city, the epitome of the latest trends and technology. But looking closely in between the skyscrapers, there lie hints that reveal an alternate story, a story of a 600-year-old capital city. Seoul's Historic Walks in Sketches discovers and brings to life these stories. From the Joseon era's palaces and fortresses to modern skyscrapers of glass and steel built on historic sites, the author's pencil sketches bring forth a new dimension of Seoul. Accompanying the illustrations are his insightful, witty commentaries on local history that go a long way in presenting readers with a captivating view of the unknown city, a city almost exotic in its mystery.

The ever-changing city of Seoul: Sites and stories unfamiliar even to locals
It would be an understatement to say that this book is only dedicated to tracking down the historical traces of Seoul. As the author says, "Seoul isn't an antique-it's an ever-changing organism." He discusses the recent changes that have proven significant to the city: Gwanghwamun Square, the new Seoul City Hall, the Statue of Peace facing the Japanese embassy, and contemporary installations at Cheonggye Plaza. Introducing hidden attractions around the city, from an ecological park on a skyscraper rooftop to evidence of historical figures cleverly hidden in amongst the buildings, Seoul Historic Walks in Sketches contains extraordinary and unmatched insight into the city.

Janghee Lee majored in urban planning and studied illustration. He contributes illustrations and columns for several local newspapers and magazines. His books in Korean include Tour of New York: Sketching the Landscape, America: Meeting a Thousand Freedoms, and Tree Tales.
After living in Seoul for decades, Lee decided to tour the city with a sketchpad in hopes to "understand the city better." He has wandered the city's maze of streets and alleyways, capturing in his sketchpad the stories and scenes discovered within. By col lecting decades of sketches and commentary, his book represents, in a way, a life's work. He says, "It seems I've been writing this since the time I was born."
Lee organizes sketch tours with drawing aficionados, and he continues to use his drawings to preserve landscapes that are on the verge of disappearing.

David M. Carruth moved to South Korea, after graduating from John Brown University in Arkansas with a bachelor's in English literature in 2006. During eight years as a full-time Korean-English translator, he has worked extensively with both fiction and nonfiction. He has translated a number of books, including Across the Tumen, another historical novel for young adults by Moon Young-sook.

This is a work of fiction based on true historical facts, in-person interviews, and testimonies of the "comfort women." The names and details of certain real persons, places, and incidents have been changed in the novel, and all other characters, places, and events are products of the author's imagination.