Led Zeppelin All the Songs (Hardcover) 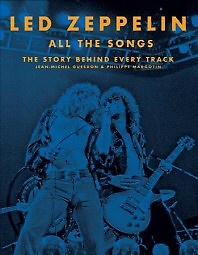 Review for Pink Floyd All the Songs:
"Even superfans of the rock legends will learn something new."
―Entertainment Weekly

Review for Pink Floyd All the Songs:
"This chronological presentation of everything Pink Floyd will satisfy the most hard-core fans and captivate those unfamiliar with the band's massive musical output."
―Booklist

"Necessary for the rabid fan, certainly, but more than worthy of a look, and a whole lot of fun, for the rest."―Jambands

"Here's a perfect gift for the Led Zeppelin completists who have every recording by the legendary rockers. There are also over 500 photos."―Dayton Daily News

Take a deep dive into the innovative recording history of Led Zeppelin, in this newest addition to the fan-favorite All the Songs series.

Fifty years after their first practice in a Soho basement, Led Zeppelin continues to fascinate new generations of listeners. While their legendary back-stage debauchery has been written about extensively in other books, All the Songs is all about the music, detailing the studio magic and inspiration that made all nine albums go platinum, including Led Zeppelin IV which was certified x23 platinum and has sold more than 37 million copies worldwide.
Studio stories will include their productive time at Headley Grange in Wales, a poorly-heated former poorhouse where they recorded parts of Led Zeppelin III, Led Zeppelin IV, Houses of the Holy and Physical Graffiti. And how the first album was recorded in three weeks but their second took six months, done while the band was on a world tour. They carried the masters of the recording session in a steamer trunk wherever they went. Out of these chaotic sessions came the "Whole Lotta Love," which was finished in New York with Hendrix engineer Eddie Kramer helping create the psychedelic middle part, as well as "The Lemon Song," which was cut live in the studio. Page worked feverishly with Kramer to mix the LP on a primitive 12-channel Altec board in a two-day span.
Fans will also learn the genesis of their lyrics, the inspiration for their album covers, the instruments used, and the contributions of engineers such as Andy Johns, who helped create the iconic drum sound on "When the Levee Breaks" by recording Bonham at the bottom of a stairwell.

Jean-Michel Guesdon, a musician, composer, and sound engineer. Together with Philippe Margotin, he has written All the Songs books about the Beatles, The Rolling Stones, Bob Dylan, and Pink Floyd.

Outside of the All the Songs series, Philippe Margotin has written numerous books on music, including biographies of U2 and Radiohead.

They both live in Paris.