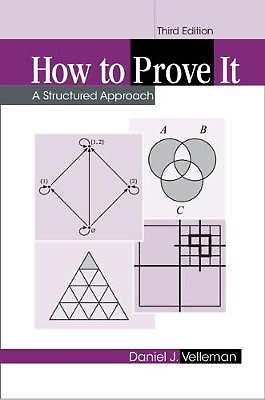 Proofs play a central role in advanced mathematics and theoretical computer science, yet many students struggle the first time they take a course in which proofs play a significant role. This bestselling text's third edition helps students transition from solving problems to proving theorems by teaching them the techniques needed to read and write proofs. Featuring over 150 new exercises and a new chapter on number theory, this new edition introduces students to the world of advanced mathematics through the mastery of proofs. The book begins with the basic concepts of logic and set theory to familiarize students with the language of mathematics and how it is interpreted. These concepts are used as the basis for an analysis of techniques that can be used to build up complex proofs step by step, using detailed 'scratch work' sections to expose the machinery of proofs about numbers, sets, relations, and functions. Assuming no background beyond standard high school mathematics, this book will be useful to anyone interested in logic and proofs: computer scientists, philosophers, linguists, and, of course, mathematicians.

Daniel J. Velleman is Julian H. Gibbs '46 Professor of Mathematics, Emeritus at Amherst College, and was a professor at Amherst College from 1983 to 2017. He received his B.A. from Dartmouth College in 1976, and his Ph.D. from the University of Wisconsin, Madison in 1980. His other books include Which Way Did the Bicycle Go? (with Stan Wagon and Joe Konhauser, 1996), Philosophies of Mathematics (with Alexander George, 2002), and Calculus: A Rigorous First Course (2016). Among his awards and distinctions are the Chauvenet Pri ze, the Paul R. Halmos-Lester R. Ford Award, the Carl B. Allendoerfer Award, and the Chandler Davis Prize for Expository Excellence. He was Editor of Dolciani Mathematical Expositions from 1999 to 2004 and the American Mathematical Monthly from 2007 to 2011.