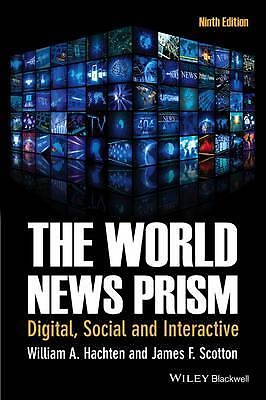 A new edition of a graduate-level machine learning textbook that focuses on the analysis and theory of algorithms.

Now available in a fully revised and updated ninth edition, World News Prism provides in-depth analysis of the changing role of transnational news media in the 21st-century. * Includes three new chapters on Russia, Brazil, and India and a revised chapter on the Middle East written by regional media experts * Features comprehensive coverage of the growing impact of social media on how news is being reported and received * Charts the media revolutions occurring throughout the world and examines their effects both locally and globally * Surveys the latest developments in new media and forecasts future developments

William A. Hachten is Professor Emeritus of Journalism and Mass Communication at the University of Wisconsin-Madison, where he taught for 30 years. His publications include: New Media for a New China (Wiley, 2010 with J. Scotton), The Troubles of Journalism (2005, 3 rd edition), The Growth of Media in the Third World (1993), and The Press and Apartheid (1984, with C.A. Giffard). James F. Scotton is Associate Professor of Journalism at Marquette University. He has taught in Lebanon, China, Egypt, Kenya, Uganda and Nigeria, an d has worked as a reporter, editorial writer, and editor with the Associated Press and with newspapers in several states and in China. He is co-author, with William Hachten, of New Media for a New China (Wiley, 2010).