The Art of Coco (Hardcover) [Hardcover] 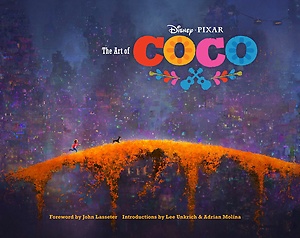 Pixar is proud to introduce the must-have companion to the vibrant new feature film Coco. The creation of Coco's mesmerizing world is explored in detail through colorful artwork, energetic character sketches, intriguing storyboards, and spellbinding colorscripts. Featuring insights from the production team about the making of the film and production art that bursts off the page, The Art of Coco overflows with insights into the creative process behind Pixar's unique and engaging vision.

"the book is filled with wonderful visuals: concept art of the characters, ranging from sketches to paintings to digital illustrations to clay sculpts. There are lush illustrations of the land of the dead, and storyboards for some of the scenes."
-GeekDad

"Art of books function as learning tools for animated films and this one is no different. The artists detail their processes from character design to lighting to storyboards. These insights help animation fans broaden their knowledge and their appreciation. The amount of meticulous and precise details just can't be overstated, especially with a film like Coco. The sheer breadth of the land of the dead alone is astounding...The Art of Coco is overflowing with stunning imagery and is an excellent companion to the film."
-PixarPlanet

Lee Unkrich is the director of Coco. He was co-director of Finding Nemo, Monsters, Inc, and Toy Story 2, and director of the Academy Award®-winning Toy Story 3.

Adrian Molina is the co-director and writer of Coco. He has worked on the Academy Award®-winning feature films Ratatouille and Toy Story 3, and was a story artist for Monsters University.