An Introduction to English Semantics and Pragmatics (Paperback / 2nd Ed.) : Edinburgh Textbooks on the English Language 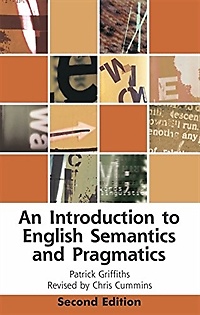 Providing a clear and accessible introduction to the linguistic study of meaning, the second edition of this bestselling textbook outlines the meaning potential (semantics) of English and how language knowledge is put to use (pragmatics). As well as gaining a systematic overview of meaning in English, readers can learn how to argue for analyses. Among the significant concepts introduced are denotation, sense relations, event types, explicature, implicature, presupposition, metaphor, reference, speech acts and (at an elementary level) Generalised Quantifier Theory. Sense relations - such as antonymy and hyponymy - are presented as summarising patterns of entailment. The sense of a word is seen as the contributions it makes to the entailments carried by sentences.

The new edition of this successful textbook is compact and self-contained, offering:
· Accessible style and clear structure
· A theoretically informed approach
· Expanded exercises at the end of each chapter
· Expanded coverage of English pragmatics both at the sentence and discourse level
· A new chapter devoted to sense relations

The first edition of 'An Introduction to English Semantics and Pragmatics' was written by Patrick Griffiths. The second edition has been revised by Christopher Cummins.