A Short History of Nearly Everything (Paperback/ Reprint Edition) [Paperback] 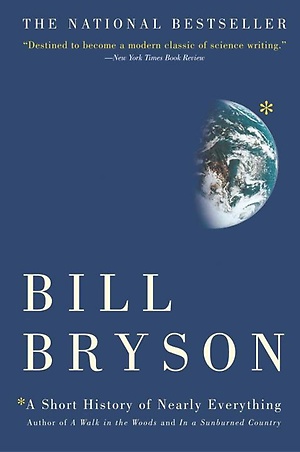 One of the world's most beloved and bestselling writers takes his ultimate journey-into the most intriguing and intractable questions that science seeks to answer.

In A Walk in the Woods, Bill Bryson trekked the Appalachian Trail-well, most of it. In In A Sunburned Country, he confronted some of the most lethal wildlife Australia has to offer. Now, in his biggest book, he confronts his greatest challenge: to understand-and, if possible, answer-the oldest, biggest questions we have posed about the universe and ourselves. Taking as territory everything from the Big Bang to the rise of civilization, Bryson seeks to understand how we got from there being nothing at all to there being us. To that end, he has attached himself to a host of the world's most advanced (and often obsessed) archaeologists, anthropologists, and mathematicians, travelling to their offices, laboratories, and field camps. He has read (or tried to read) their books, pestered them with questions, apprenticed himself to their powerful minds. A Short History of Nearly Everything is the record of this quest, and it is a sometimes profound, sometimes funny, and always supremely clear and entertaining adventure in the realms of human knowledge, as only Bill Bryson can render it. Science has never been more involving or entertaining.

Part I: Lost in the Cosmos

1. How to Build a Universe

2. Welcome to the Solar System

Part II: The Size of the Earth

4. The Measure of Things

6. Science Red in Tooth and Claw

10. Getting the Lead Out

23. The Richness of Being

Part VI: The Road to Us

1 HOW TO BUILD A UNIVERSE

NO MATTER HOW hard you try you will never be able to grasp just how tiny, how spatially unassuming, is a proton. It is just way too small.

A proton is an infinitesimal part of an atom, which is itself of course an insubstantial thing. Protons are so small that a little dib of ink like the dot on this i can hold something in the region of 500,000,000,000 of them, rather more than the number of seconds contained in half a million years. So protons are exceedingly microscopic, to say the very least.

Now imagine if you can (and of course you can't) shrinking one of those protons down to a billionth of its normal size into a space so small that it would make a proton look enormous. Now pack into that tiny, tiny space about an ounce of matter. Excellent. You are ready to start a universe.

I'm assuming of course that you wish to build an inflationary universe. If you'd prefer instead to build a more old-fashioned, standard Big Bang universe, you'll need additional materials. In fact, you will need to gather up everything there is-every last mote and particle of matter between here and the edge of creation-and squeeze it into a spot so infinitesimally compact that it has no dimensions at all. It is known as a singularity.

In either case, get ready for a really big bang. Naturally, you will wish to retire to a safe place to observe the spectacle. Unfortunately, there is nowhere to retire to because outside the singularity there is no where. When the universe begins to expand, it won't be spreading out to fill a larger emptiness. The only space that exists is the space it creates as it goes.

It is natural but wrong to visualize the singularity as a kind of pregnant dot hanging in a dark, boundless void. But there is no space, no darkness. The singularity has no "around" around it. There is no space for it to occupy, no place for it to be. We can't even ask how long it has been there-whether it has just lately popped into being, like a good idea, or whether it has been there forever, quietly awaiting the right moment. Time doesn't exist. There is no past for it to emerge from.

And so, from nothing, our universe begins.

In a single blinding pulse, a moment of glory much too swift and expansive for any form of words, the singularity assumes heavenly dimensions, space beyond conception. In the first lively second (a second that many cosmologists will devote careers to shaving into ever-finer wafers) is produced gravity and the other forces that govern physics. In less than a minute the universe is a million billion miles across and growing fast. There is a lot of heat now, ten billion degrees of it, enough to begin the nuclear reactions that create the lighter elements-principally hydrogen and helium, with a dash (about one atom in a hundred million) of lithium. In three minutes, 98 percent of all the matter there is or will ever be has been produced. We have a universe. It is a place of the most wondrous and gratifying possibility, and beautiful, too. And it was all done in about the time it takes to make a sandwich.

When this moment happened is a matter of some debate. Cosmologists have long argued over whether the moment of creation was 10 billion years ago or twice that or something in between. The consensus seems to be heading for a figure of about 13.7 billion years, but these things are notoriously difficult to measure, as we shall see further on. All that can really be said is that at some indeterminate point in the very distant past, for reasons unknown, there came the moment known to science as t = 0. We were on our way.

There is of course a great deal we don't know, and much of what we think we know we haven't known, or thought we've known, for long. Even the notion of the Big Bang is quite a recent one. The idea had been kicking around since the 1920s, when Georges Lem tre, a Belgian priest-scholar, first tentatively proposed it, but it didn't really become an active notion in cosmology until the mid-1960s when two young radio astronomers made an extraordinary and inadvertent discovery.

Their names were Arno Penzias and Robert Wilson. In 1965, they were trying to make use of a large communications antenna owned by Bell Laboratories at Holmdel, New Jersey, but they were troubled by a persistent background noise-a steady, steamy hiss that made any experimental work impossible. The noise was unrelenting and unfocused. It came from every point in the sky, day and night, through every season. For a year the young astronomers did everything they could think of to track down and eliminate the noise. They tested every electrical system. They rebuilt instruments, checked circuits, wiggled wires, dusted plugs. They climbed into the dish and placed duct tape over every seam and rivet. They climbed back into the dish with brooms and scrubbing brushes and carefully swept it clean of what they referred to in a later paper as "white dielectric material," or what is known more commonly as bird shit. Nothing they tried worked. 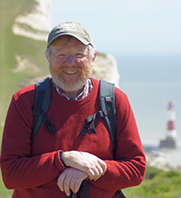