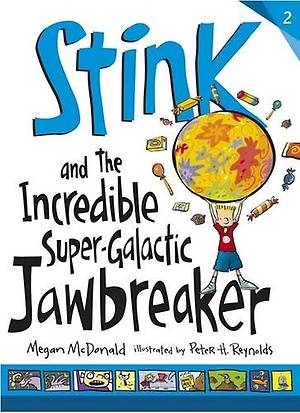 The Super-Galactic Jawbreaker Stink bought did NOT break his jaw. When Stink realizes that a letter of complaint equals free sweets, he gets a little carried away! Stink puts his letter-writing skills to the test when he complains about a jawbreaker that did not break his jaw - with surprising results. He gets sent a huge box full of sweets! But he's so intent on getting freebies that he forgets his best friend's birthday. No wonder Webster's stopped speaking to him. Stink puts things right when, with some help from his Dad, he surprises his class with a pinata using all the free sweets - and decides that while freebies are good, friends are even better! It will feature a newly designed cover as part of the 2013 relaunch of all Stink backlist titles.